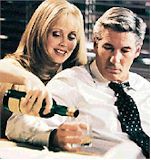 Robert Altman has been one of America&#146;s most visible contrarians for more than thirty years now; the man is possessed by the same perverse imp that&#146;s so often confounded the fans of Mailer, Brando, and Dylan. His restlessness causes him to ricochet off in unexpected directions when his style is praised; when he&#146;s criticized, he&#146;s liable to dig in his heels and offer up more of the same. It’s nice to report then that Altman’s newest film, Dr. T & the Women, should find a home in the heart of his longtime admirers. It’s a film that sets new challenges for everyone involved – himself, his fans, and even his detractors – and that’s punctuated by a true surprise ending.

Working again from a script by Anne Rapp (Cookie&#146;s Fortune), Altman&#146;s story has a deceptively still center out of which radiates a host of waving tentacles&#151;each of them tipped with estrogen. Poised in the middle is Dr. Sullivan "Sully" Travis (Richard Gere), a Dallas gynecologist who caters to the cream of Texan high society, and surrounding him is the network of women whom he sustains from varying distances: his wife, Kate (Farrah Fawcett); his daughters Dee Dee (Kate Hudson) and Connie (Tara Reid); his sister-in-law, Peggy (Laura Dern); his chief nurse (Shelley Long); and his scores of demanding patients. Sully can always find respite in hunting and golfing weekends with his buddies, and he appears to be on top of the world as the day of Dee Dee&#146;s marriage approaches. But suddenly rents appear in the fabric of his life and he begins to find out just how true his credo&#151;"Every woman I&#146;ve ever met had something special about her"&#151;really is. After Kate peels her clothes off and plunges into the fountain at a swanky mall, she&#146;s diagnosed with the "Hestia complex"&#151;a fictive malady that causes affluent women to regress into a second childhood&#151;and has to be institutionalized. No matter how hard he tries, Sully can never catch up at work: his lobby is always filled with favor-seeking hypochondriacs, politicians, and seductresses. Connie confides in him that Dee Dee has been having an affair with her appointed maid of honor (Liv Tyler). His receptionist is harboring a secret crush on him. And, finally, there&#146;s Bree (Helen Hunt), the new assistant golf pro at Sully&#146;s country club, and the one woman in his life that doesn&#146;t need him. Bree is an undemanding, straightforward soul, and as Sully slides into an affair with her, he begins to realize how smothered he’s been by the other women in his life. In its closing minutes, as he tries to effect a jailbreak from his existence, the movie jumps into the realm of myth with the aid of some restrained but tasty special effects and a series of mind-blowing punchlines. It’s unlike anything Robert Altman has ever done.

Feminists have slammed Altman for his sexual attitudes ever since Hawkeye and Trapper dropped that tent around Hot Lips O&#146;Houlihan, and he&#146;s mostly responded by ignoring their protests and going about his business. Intentionally or not, Dr. T & the Women waves a red cape at these critics, and they&#146;re likely to be outraged all over again by the nude scenes and ass-shots, the presentation of women as air-kissing termagants, and a giddy closing line that cries out for misinterpretation. But Altman and Rapp have fashioned a story about how the bonds between men and women can harden over time into a series of commercial and emotional trade-offs, and what either side requires to break out of the deadening cycle of obligations. Dr. T&#146;s characters may not get everything they want, but most of them get what they need.

As Sully, Richard Gere finally manages to display his silky charm without using it as a prop, and his bargain-basement style of Method acting is almost invisible. He makes Sully&#146;s gentleness and intelligence seem genuine&#151;you can see why these women rely on him the way they do. (Gere covers himself in glory during Sully&#146;s pep talk to a menopausal patient.) Helen Hunt has one of the narrowest ranges of any current movie star, but here her masculine bluntness effectively sets her apart from the other women in Sully&#146;s life, and Rapp has given Bree&#146;s dialogue a fine ambiguous edge&#151;everything she says rides a fuzzy line between independence and self-interest. (She doles out information about herself on a need-to-know basis.) Dern&#146;s pickled pratfalls and champagne-hoarsened voice give the movie a gut-busting screwball spin, and Fawcett follows up her surprising work in The Apostle with another carefully scaled performance.

The movie loses its touch only in a couple of places. Connie&#146;s obsession with JFK&#146;s assassination and Dee Dee&#146;s desire to become a Dallas Cowboys cheerleader are unnecessary nods to the Dallas setting, when a stronger sense of place comes through in the brief City Council meeting. The anguish that Sully feels when Kate becomes fully detached from her adult self is presented in a sadly conventional way for an Altman film: the camera zooms in on Gere&#146;s suffering as Lyle Lovett&#146;s piano tinkles in the background. And when Sully hears of Dee Dee&#146;s lesbian affair, his reaction doesn&#146;t match up with everything we know about him; it&#146;s hard to understand what it is about the news that would make this experienced, empathetic man lose his spirit, even if temporarily. (It&#146;s the one time in the movie that Gere falls back on the actorly tics that have aggravated two generations of moviegoers.)

But Dr. T contains more than enough evidence that Altman is still a master, even at 75. The candlelit scene in which Bree and Sully seduce each other is a catalog of perfectly proportioned details – it’s as tender, complex, and matter-of-fact as any real seduction. The movie is studded with small triumphs of wry observation, such as the wistfully knowing goodbye the cheerleaders give to a colleague that’s about to be fired, or Irene Cortez’s quietly marvelous work as the Travises’ housekeeper. And Altman’s filmmaking has regained a visual lushness that it hasn’t had since before Nashville. Some shots, such as the wide-angle view of a golf course being spritzed with jets of water, are enough to melt you in your seat, while the outdoor wedding is shot in a palette of colors – pastels that look inflamed by heat lightning – that’s entirely new to his pictures.

Dr. T & the Women isn’t as even as The Player and it lacks the emotional sprawl of Short Cuts, but ultimately it’s more tantalizing than either of those pictures. It’s not in a class with Altman’s masterpieces of the early 1970s (few movies are), but with its swaying rhythms and brazen approach to storytelling, it’s a worthy addition to his canon. At an age when most directors, even the greatest ones, have either retired or begun to ape themselves, Robert Altman is still making movies that reshape his entire career.