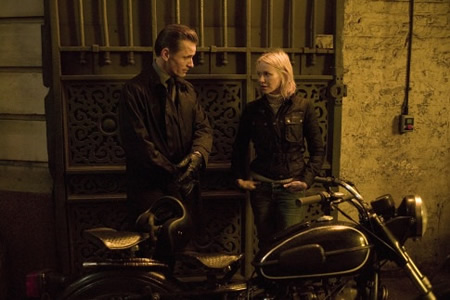 What do you get when you mix a talented Canadian auteur, a well-intentioned but middling British scribe and a cast made up of an American, a Frenchman, a German, and a Aussie, all playing characters of Russian descent? You might get Eastern Promises, a Euro-Hollywood fusion film – something like Yorkshire borscht with a side of fries. It might seem new and exciting at first, but once it settles, you’ll wish you’d gone for the authentic dish, instead.

David Cronenberg has made a name for himself over the last three decades as a filmmaker unafraid to take chances often to stomach churning effect. His envelope-pushing reputation precedes him and his films, lately to their detriment. His previous film, A History of Violence (2005), was loved by many, but hated by just as many, it seems. But whether you were hot or cold about it – I was lukewarm but mostly unmoved – it was hard for not to go into it expecting to see a Cronenberg film, i.e. a film that will make you squirm, scream and be afraid of ever going to the doctor again. He has yet to shake that reputation, as it has followed him to his newest film. Eastern Promises, a sleek, stylish thriller about slavery within the seedy underworld of the Russian mob in Britain, may sate his die-hard fans with the one literally eye-popping scene that is Cronenberg to its core, but it far from lives up to the bar set by Dead Ringers (1988), Videodrome (1983), or The Brood (1979).

To be fair, if this is what it looks like for Cronenberg to coast, it looks a hell of a lot better than, say, the abysmal blandness of Woody Allen’s asleep-at-the-wheel pictures. It’s worth taking Cronenberg to task here, though, not merely for shedding his oozy fly’s skin for a shiny leather suit, but for the unimaginative, conventional, even, devices he employs to tell this particular tale. An insert shot exposes two hands touching as a diary is passed between them; a superfluous trope often exposing the filmmakers’ lack of confidence that sufficient tension had been built between the actors. Here is no exception. Another shot pulls back from a man walking alone on a dark street to reveal that, not surprisingly, he’s being watched. One expects more of Cronenberg’s cinematic vocabulary. In the most egregious example of Eastern Promises’ tired filmic language, there is a dinner table scene, in which every single line of dialogue is exposition. Naomi Watts storms out of the room at the end of the scene, supposedly offended by what her character’s uncle just said. However, it’s easy to imagine that she did so more out of disgust for how thinly veiled the expository writing was.

Not all of the film is as objectionable. The atmosphere Cronenberg creates is reminiscent of Nicolas Roeg’s work from the 70’s, which occasionally elevates the film from its run-of-the-mill Hollywood tedium. For that, it takes an above average director. Armin Mueller-Stahl makes for a fine mob boss, managing to find the hidden humanity in the most horrendous of individuals. Viggo Mortensen always seems to be learning as he goes. By the end of the Lord of the Rings trilogy, he seemed to have finally adjusted to walking in Aragorn’s shoes, though it took him three movies to get there. Similarly, his Russian thug, who, in a surprisingly nice touch on screenwriter Steven Knight’s part, often insists on referring to himself as ‘just the driver,’ evolves from mere caricature – a subdued one, but a caricature, nonetheless – to a more layered portrayal by the end. Rarely are films shot entirely in chronological order, so this criticism is more perception than anything else. But while Mueller-Stahl moves effortlessly from scene to scene, Mortensen wears his hard work and research on his face.

It’s hard to find fault with Naomi Watts and Vincent Cassel, both turning in sympathetic performances and both able to find the right chord to play off of Mortensen in their scenes with him. The tension between Mortensen’s Nikolai and Cassel’s damaged, hedonistic demons balances nicely with Nikolai’s interest in Watts’ nurse’s saintly, redeeming nature. Indeed, the repressed homoeroticism of Cassel’s Kiril and Nikolai’s relationship is given as much of a dramatic arc as Watts’ pure Anna and Nikolai’s is. Knight, who also wrote Dirty Pretty Things (2002), is clearly drawn to these kinds of dichotomies in his narratives. At least he’s a little (though only a little) less obvious about them in Eastern Promises.

It’s here in the relationship between writer and director, or between screenplay and director, rather, that I feel the film falters most. Knight’s lofty aims of shedding light on the plight of immigrants in Britain and the problem of human trafficking with humanity and tenderness just may not be the best fit with Cronenberg’s penchant for violence and sensuality. The film struggles to find itself between Knight’s sentimentality and Cronenberg’s severity. Even when the screenplay is not the best match for him, Cronenberg, an incredibly well informed and intelligent director, is apparently able to deliver a fine-enough by-the-numbers film, without much effort. The question is whether he can do better. Yes, he can.