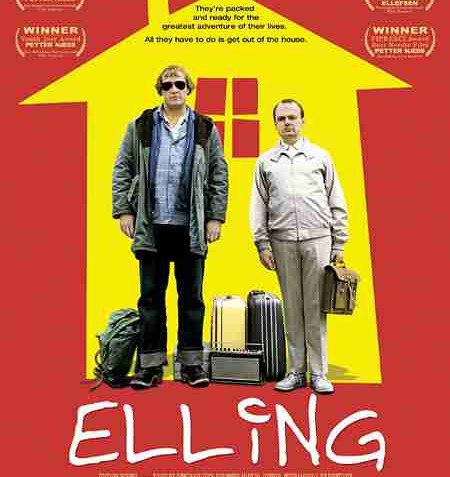 Too many movies make their points directly, laying out each idea laboriously and then highlighting it obviously, just to make absolutely sure no one misses it. It’s an approach like a grade school text book instead of an intelligent entertainment, and it’s likely to drive thinking adults screaming from the theater–or at least to discourage them from seeing another of that director’s films.

Then along comes a small film like Elling–unpretentious, charming, quirky, original, and largely making its points indirectly. It’s the kind of film that creeps up on you and leaves you smiling, the kind of film that keeps spinning around in your head days after it was seen, its insights bubbling up like fresh spring water.

Elling was an overly sheltered "mother’s boy," so shut off from the world that when his mother died he had to be institutionalized. His illness is not identified directly in the film, but paranoia appears to be central to his problem and he’s plagued with dizziness and anxiety. After two years in the institution, he has been released, along with his roommate, Kjell. The two of them are deemed well enough to try to function in society again, in a welfare apartment under the eye of a social worker. Kjell’s problem remains unnamed as well. He’s not too bright, totally inarticulate, a horny virgin in his thirties who tends to knock his head repeatedly against a convenient wall or table top when he gets frustrated.

They’re an unlikely couple, but they’re used to each other, and in a threatening world, that goes a long way. They’re so accustomed to sharing a room that they move the bed from the second bedroom in the flat into the first, so they can sleep in the same room, the way they did before. Elling is afraid to answer the phone, afraid to leave the apartment. Any intrusion, any change gets him agitated and defensive.

Kjell, on the other hand, is more a case of under-socialization than anything else. Both his interpersonal skills and his personal hygiene are pronouncedly deficient, but he is not inhibited by the fears that Elling is and is more able to start moving out into the world. They each have a series of small adventures, testing their new freedom, gradually stepping out and taking the risks of the dangerous reality out there, slowly finding their way into rewarding experiences. Through it all, the bond between these two very different people is one of friendship and mutual support based on common needs.

For all that these two have genuine difficulties to overcome, director Petter N�ss keeps the tone light. Movies about the mentally ill (The Butcher Boy, The Snake Pit, David and Lisa, Girl Interrupted) which aren’t using insanity as an element of cheap horror, tend to be dark and focus on the pain. Even One Flew over the Cuckoo’s Nest is very dark comedy. Elling, without belittling its subjects’ problems, sympathetically finds the droll humor in their situation and behavior; there’s no angst in sight. And the characters are allowed to breathe beyond their neuroses. Elling, it turns out, is interested in poetry and Kjell is a mechanic who is a whiz with cars. Through the screenplay by Axel Hellstenius and the wry performances of Per Christian Ellefsen and Sven Nordin, these two characters are as endearing as any seen on the screen this year.

It would be difficult for anyone (presumably among the mentally healthy) not to identify in some way with these two eccentrics. In the end, the difference between their weaknesses, their fears, their inadequacies and our own is largely a matter of degree. That they are able to overcome, to take the gradual steps to "normality," speaks to our common humanity. Elling is an inspirational film without a trace of the cloying sentimentality that usually accompanies inspirational themes on screen.