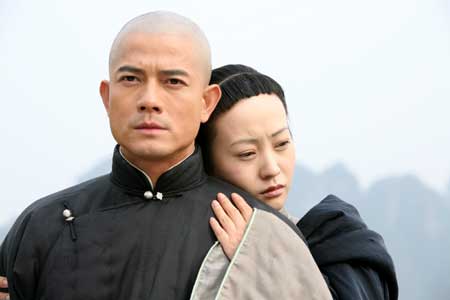 Can you make a gripping epic from the ups and downs of banking in 1899 China and its Pingyao or “Wall Street,” when opium was the drug of choice—particularly for wives and concubines—money was changing over to paper bills, and the Boxer Rebellion was on the way?

Well, if you are first-time Taiwanese director Christina Yao, and have seemingly all the time you can lay your hands on, you can try. This is the theme of Empire of Silver, now coming to a Cineplex near you, six years after it was first shot in Western China. These were the first banks in Chinese history, and “the Chinese Wall Street” began in the dusty desert-edge cities to the west of Beijing during the Qing dynasty, where Yao filmed.

The film seems overlong, yet somehow not long enough. A theater director trained at San Francisco State University and Stanford, Yao needed more length for exposition. And who can blame her if she could not bear to part with a single gorgeous frame? Not me.

And if you have Hong Kong superstar Aaron Kwok to star as the love-struck Third Master along in your camel chain, you also have access to the ready-made army of Kwok fans.

Somewhere inside this film is a popular epic, thanks to Hong Kong director of photography Anthony Poon and production designer Yee Chung Man. The lovers’ theme is by Hong Kong composer Su Kong, who scored Bertolucci’s The Last Emperor. So the music and production values soar at the altitude of a Far East Lawrence of Arabia.

Yao depicts Lord Kong’s fabulously wealthy banking family, his sons and surrounding culture, and his fall from grace. “Doing business is no more than conducting oneself,” says Third Master (Kwok), who inherits his father’s pingyao, or banking business, with its arcane customs.

The journey of third son Kong from waster to moralist as he takes over his father’s business (his two older brothers having been disqualified) from his stern father is a subplot. Yao also pursues his undying passion for his young stepmother (Hao Lei), unwillingly married to his father and stopping at nothing to resist her own marriage.

Based on several large potboilers of Chinese history, Empire of Silver strives to distill fascinating details, like the hall full of clicking abacuses and trains of hand-carried chests of silver reserves across endless distances. Using the antiques and architecture of Shanxi province and actual costumes of the era, Yao erases any modern details with CGI.

On the plus side: the most ravishing cinematography yet seen of the vast Gobi desert, of northwestern China and Mongolia, bathed in tender golden glows and complete with wolves scarier than anything in The Twilight Saga. Not since David Attenborough’s Living Planet has an infinite desert sandscape made more of an impact on viewers. The overwhelming sense is of vast undertaking of myriad plot threads fused into an enigma.

The tale of the Shanxi bankers of Pingyao is a classic moral tale, and a cautionary one, since it depicts the acquiring and eventual loss of wealth inside three generations, and the bank—if not the lovers—founders on passion. Third Master’s dangerous journey across the Gobi is a forty-day pilgrimage in the wilderness to pursue spiritual rebirth.

But the forbidden love with Stepmother Kang survives, if confusingly, in flashback scene after scene. Some of the nuances of Third Master’s conversion to Confucian values have fallen through cutting room cracks, and the dilemmas of her missionary friend (Jennifer Tilly) relate the attempts of the Allies to stamp out nationalist rebellions without explaining much. Subplots involving secondary characters should help, but don’t at all.

The result is a movie of breathtaking beauty as well as enormous complexity, ideally seen on a wide screen, and conjuring a sweep of history that takes in everything from the wretched and starving (peasants die from Lord Kong’s withheld salt reserves) to the place of women within Confucian ethics. There are several more movies in here!

Significantly, and maybe it’s a reflection of our last census results, this is one of the first major releases in Mandarin to come out as a major release since Crouching Tiger, Hidden Dragon. Kwok’s name will help place it among film fans and who knows, Empire of Silver may even get a longer edit.