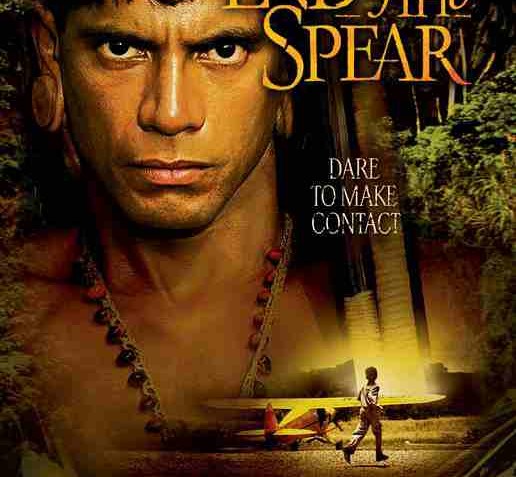 In the 1950s, five young North American Christian missionaries and their families went to the Amazon region of Ecuador to make contact with a remote tribe then known as the Auca, now known as the Waodani. The violence of this Amazonian tribe was legendary. Trapped in a culture of revenge, the Waodani&#146;s internecine warfare of spearing one&#146;s enemies to death had brought the tribe to the brink of (self) annihilation. End of the Spear frames the historical first encounter between the two groups as a New Testament Gospel intervention into an angry, eye-for-a-eye Old Testament-style culture. The original events were covered by photojournalist Cornell Capa that resulted in a ten-page photo spread in Life magazine. Over the interceding fifty years, the tale has been reworked repeatedly and is now a classic among missionary conversion stories.

In Jim Hanon&#146;s film, five young, white, North American men, led by Nate Saint (Chad Allen), bring their wives, children, 1950s American culture, and missionary Christian values to a remote corner of the Amazon jungle. End of the Spear presents these men more as anthropology enthusiasts, eager for their first sighting of some fabled wild game. The sumptuously spectacular nature photography is mesmerizing and the oversaturated studio orchestra sound track (as if borrowed from Born Free) hold the viewer firmly to the film&#146;s vision of loving liberators from Western civilization rescuing misguided savages from themselves. Alas, at no point does the film betray the slightest awareness of the burden of history of the film&#146;s cinematographic language.

Saint and pals stay in touch by short-wave radio and pay visits by puddle-jumping with their small airplanes. Their conversations are laced with an endless reiteration of "family values." Nate Saint repeatedly draws attention to his right relationship with his son Steve and soon the film seems to be suggesting that the missionaries have brought their families all the way out to darkest Ecuador as an exercise to prove the universality and durability of their own tribal values.

The first face-to-face encounter between the North American Christians and the South American savages occurs along a sandbar in a riverbed. The Americans are all Ipana toothpaste smiles and Wonder bread wows as they encounter a band of Amazonian warriors, played by movie-star handsome, gym-toned Latino actors.

Taking a cue from Mel Gibson&#146;s Passion of the Christ, thorough-going ethnographic preparations were undertaken. The actors representing the Waodani all speak in the native tongue (English subtitling provided). Unfortunately, they are also held to a melodramatic script which does not convince. The Waodanis slaughter every last missionary on the spot. Soon, the Waodani warriors take the missionaries&#146; children and their wives, in their gingham dresses and garden party sun hats, back to their village. In no time, and with little exposition or explanation, the good wives take the matter into their own hands and convert the Waodoni, ultimately saving the tribe from itself.

After an hour of nearly naked, lithe male warrior bodies running through the jungle, it is truly a miracle the white womenfolk did not succumb to the temptations of the tropics. Had End of the Spear been made as a documentary, it easily could have avoided the pitfalls End of the Spear did not. Had it been made forthrightly as an entertainment, its homespun Bonanza edification and Dr. Quinn Medicine Woman vision might easily slide down the viewer&#146;s throat. However, the vision and values the film celebrates are at such odds with the reality it has refashioned as a breathless melodrama, it is hard to not give in to temptation and poke fun at its unintentional camp.