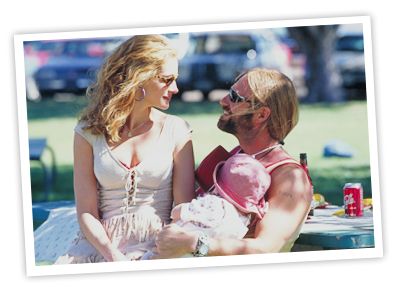 Erin Brockovich is a movie with two personalities, one that&#146;s breezy and winning, and one that&#146;s maddeningly preachy. It&#146;s almost a shock when the pushy side wins out in the end &#150; the early part of the movie is so good that it seems like nothing could ruin it.

The picture (which is based on real characters and events) is at its best as an American Pygmalion tale. When we meet her, Erin (Julia Roberts) is a nearly penniless mother of three who can&#146;t find work because every potential employer recognizes her as his worst living nightmare. Not only is she uneducated and unskilled, she dresses like she&#146;s perpetually in heat: she&#146;s all cleavage and miniskirts and push-up bras. Even worse, her lack of standing in the world has made her hypersensitive, so that any perceived slight sends her into profane (and explosively funny) tirades &#150; she specializes in ripping people a new one.

When Erin is injured in an auto accident, she takes her case to Ed Masry (Albert Finney), a well-meaning lawyer whose practice is treading water. They lose their case when Erin self-destructs on the stand, but the story really begins when she manipulates Masry into giving her a job as a paralegal in his law office. At the same time, she&#146;s getting to know her new neighbor, George (Aaron Eckhart, in a warm and sexy performance), a down-to-earth biker who takes a shine to Erin when she tells him off for revving his Harley too loud. (He&#146;s so instantly smitten that he falls flat on his face.) But two busted marriages have made Erin prickly and unapproachable; when George begins courting her, he has to defuse her like a bomb.

Erin&#146;s chance review of a file leads to her discovery that a California utility company, PG&E, polluted the groundwater around Hinkley, California, with a carcinogenic chemical, and then tried to cover up its actions when the local residents began falling ill. The discovery leads to a war on several fronts, as she works to convince Masry, the plaintiffs, and a judge that an injustice has occurred. The battles give her anger a focus for the first time in her life, and as the case turns into a huge class-action lawsuit, Erin learns how to put her salty personality in service of a larger goal.

In Erin Brockovich, Julia Roberts proves that she&#146;s more than an ear-to-ear smile &#150; she&#146;s a gifted, intelligent actor. A role like Erin would make most people shoot for a "towering" performance, the acting equivalent of an atomic bomb, but Roberts keeps Erin human and accessible by taking things one piece at a time. She doesn&#146;t strap on any accents or funny ways of walking. Instead, her natural sense of the character comes through in the way Erin takes off her neck brace, or in the way she wonderingly repeats the phrase "county water board" the first time she hears it. And the scenes between Erin and Masry are everything you want them to be. These two make a delicious comedy team, communicating in shrewd looks and charging each other up for battle.

But director Steven Soderbergh, who breathed magical new life into overworked genres in Out of Sight and The Limey, makes his work in those films look like accidents. For Erin Brockovich isn&#146;t just a conventional movie &#150; it&#146;s also a clumsy and indifferent one. What begins as a compelling character study turns into a merely passable courtroom drama as Erin&#146;s development is overshadowed by a lot of dialogue about contaminant plumes and corporate wrongdoing. By the end this lovingly created character has become a loudmouth saint who simply wanders around telling everyone off &#150; everyone but her clients, that is. With them she&#146;s a watery Mother Teresa, gazing on them with such empathy that you think she&#146;s about to cure their gallstones.

For a movie that&#146;s full of such fine moral dudgeon, Erin Brockovich is itself on slippery ethical ground. It&#146;s bad enough that it&#146;s one of those slot-machine movies that toss a few million dollars to each of its good guys at the end. (Simply doing the right thing isn&#146;t considered an accomplishment in movies anymore; one must prevail, and get well paid for it, too.) But Soderbergh panders to his audience in a way he never has before, filling his story with strawmen who only serve as punching bags for Erin&#146;s righteousness. The picture hits a low point in its treatment of a comically horny records clerk who hides incriminating documents. When she finds out what he&#146;s done, Saint Erin, who earlier in the film wasn&#146;t above sexually manipulating the frustrated young man, lays him low with the chestnut, "I want to know how the hell you sleep at night." And it&#146;s really beneath Soderbergh to make a key character seem threatening until he&#146;s revealed as one of the good guys; it&#146;s the kind of phony narrative doorstop that uninspired directors resort to.

Erin Brockovich might become a giant hit &#150; the crowd I saw it with whooped and hollered at every line. It&#146;s the same kind of whooping that could be heard during The Longest Yard and The Bad News Bears, and in every other movie where David turns us on by taking it to Goliath. Erin Brockovich is a Frank Capra fantasy updated for Y2K: it&#146;s Jimmy Stewart in a see-through blouse. But like Erin herself, the movie is one big tease.