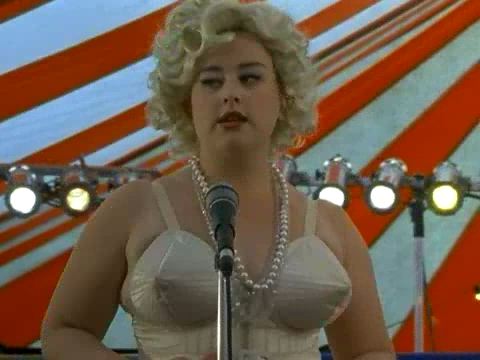 Belgian films that have managed to gain distribution in the U.S. have been, more often than not, rather serious, if not grim: Rosie, La Promesse, Ma Vie en Rose. In contrast, a new import, Everybody’s Famous, is as light as a Stella Artois Pilsener and as sweet as a Godiva chocolate. Very much in the sitcom mode it might just manage to capture a reasonably responsive American audience. As a subtitled foreign language film (Flemish this time, not French), it would normally be limited to art houses. But art house audiences might find it a bit thin; it’s more suited to the mall and the question is whether it will "cross over."

Marva (Eva van der Grucht) is a not particularly attractive, overweight seventeen year old whose father, Jean, is obsessed with her future success as a pop singer. Making the rounds of amateur contests, dresssed like a poor imitation of a drag queen, Marva sings her father’s embarrassingly bad songs without energy or conviction, and often badly off key. The grim-faced judges repay their pain with low scores.

But when Marva sings for a kids’ puppet show, the song is lovely and so is she, making it clear that Jean’s blinding ambition is hurting her prospects more than helping. Rather tin-eared himself, he hums his dreadful tunes into a tape recorder, trying to compose the hit that will make Marva a star.

Through a carefully plotted, if improbable, series of events, Jean, with the help of a young co-worker from the bottle factory, kidnaps a major pop star and holds her ransom, demanding a television appearance for Marva. There’s little more to it and the outcome is screamingly predictable. What might have been satirical doesn’t have enough edge to bite. Still, the measured building of the plot in the first hour, if a tad slow, does lay a solid groundwork in story and character for the rapidly unfolding events in the last third. The kidnappers, the most bumbling miscreants since Small Time Crooks, become almost endearing in their incompetence. It’s that sort of detail that distinguishes the movie, rather than any profound statement about fame or the media.

Marva’s transformation carries the film to a satisfying conclusion and wins the audience over. When the opportunity so avidly sought is within her reach, she rises to the occasion. It’s a tried-and-true formula and it works here in an amiable way. Director Dominique Deruddere succeeds with this material where others might not have done as well, partly because the film exhibits no pretensions to being more than it is, making it easy to accept on its own terms. More importantly, Deruddere never condescends to the characters–as foolish as they may be, she respects them and sympathizes with them and so do we.