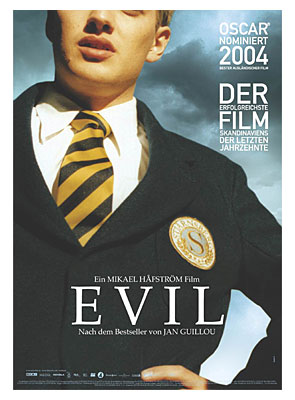 Director Mikael Hafstrom’s boarding-school drama Evil begins in a very Swedish way as a kind of Lord of the Flies examination of the incipient evil that leads to sadism and tyranny. In an ethical society based on reason and mercy, in a state based on law, places like the private school Stjarnberg are not supposed to exist. Half way through, the film transforms into a secular fairy tale, where allusions to Christ&#146;s suffering, Gandhi&#146;s pacifism, and the Stoics&#146; mastery of reason over emotion point the way to the eventual triumph of justice.

Sweden had declared its neutrality during World War II, and many anti-Nazi German nationals and others found political asylum there. Thus Sweden managed to sidestep a great deal of the insanity of the war, even though Hitler&#146;s racial purity police had deemed them racially close Aryan cousins. Hafstrom&#146;s choice of 1950s post-war Sweden therefore resonates with both subtle and heavy-handed irony.

Boarding school life at Stjarnberg for sixteen-year-old Erik Ponti (Andreas Wilson) also thoroughly resonates with Robert Musil&#146;s The Confusions of Young Torless. The Austrian writer&#146;s 1906 novel foreshadowed World War I and the fall of the Austro-Hungarian Empire, while Volker Schlondorff&#146;s reworking, and his first critically acclaimed film, Young Torless examined the seeds of systematic sadism from which Nazism had sprouted, in the context of the repressive closed society of a boarding school.

Erik has been raised in a thoroughly normal middle-class Stockholm family. His mother (Marie Richardson), a fearful and ineffectual woman, has married a cruelly sadistic man. The stepfather (Johan Rabaeus) beats Erik on the slightest provocation, real or imagined. He is clearly seriously disturbed. Shades of stereotypical Nazis, mother always dashes off to play the piano and cover up the sounds of the beatings. Consequently, Erik soon blossoms into a full-blown school-yard bully. When he is expelled for having beaten one kid too many, his mother decides to send him to the only place that will take him, the anachronistically conservative private boarding school Stjarnberg.

Incredibly, Erik has recognized his own dark side while he can still do something about it. Like Torless, he finds himself incarcerated in a sadistic hell hole disguised as an institution of education. The only place he dislikes more is home. Much of the film takes a sobering look at the repressive, patriarchal power structure of Stjarnberg, where upperclassmen rule over the lower orders through intimidation, physical violence, and by pulling social class rank. The teachers do more than turn a blind eye, for aristocratic privilege is a long-honored tradition at the school.

Erik and his bohemian outsider room-mate Pierre Tanguy (Henrik Lundstrom) share a passion for James Dean and American music. They mirror the American optimism infusing post-war Europe. Prime bully of the First Form, Otto Silverhielm (Gustaf Skarsgard), is utterly loathsome, drawing up to his full arrogant aristocratic bearing, exercising his class privilege to mete out sadistic punishment with impunity at every opportunity. Even as a champion competitive swimmer Erik&#146;s naive faith in meritocracy will be sorely challenged. The second half of Evil takes this genre into new and challenging territory.