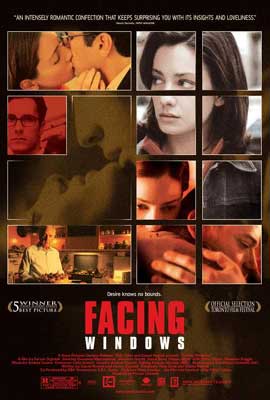 Ferzan Ozpetek’s first film, known variously as Hamam or Steam or The Turkish Bath demonstrated what continue to be Ozpetek’s strengths — interesting, complex stories and strong character development, enhanced by an eye for handsome screen composition. His Secret Life continued to show Ozpetek’s affinity for character-based stories, but he spread himself too thin, complicating the story to a point where the film became plot-driven, rather than character-driven; it lost it’s footing somewhere along the way.

Facing Windows once again offers an ensemble of interconnected characters, sufficiently rounded to be sympathetic, in a story better focused than His Secret Life, but still short of needed structural tightening. The key character is Giovanna (Giovanna Mezzogiorno), an accountant for a poultry company, wife of nine years to kind and hunky Filippo (Filippo Negro), and mother of two kids, including a smart and smart-mouthed daughter who seems a chip off the old block. Filippo works the night shift in a menial job, a source of conflict between him and Giovanna who are shown sniping at each other in a squabble that is symptomatic of a marriage in trouble. The impression is reinforced when Giovanna turns away from Filippo’s advances in bed.

Giovanna has noticed an attractive man who lives across the way from them; their windows face one another. It’s clear she has fantasies about him, further underscoring the shakiness of her marriage.

As she and Filippo are walking, they encounter an older man (Massimo Girotti), nicely dressed, who seems to be confused and to have lost his memory. Giovanna would keep going, but Filippo, in his caring way, can’t turn away from someone who obviously needs help and he brings the man home. The mystery of who the old man really is provides added narrative drive to the story; suffice it to say here that he becomes an important influence on Giovanna, inspiring her to give up her ordinary job and, as it were, follow her bliss. The old man’s history, too, provides a model of moral courage which also influences Giovanna in her decisions.

What weakens Facing Windows is the lack of any but the broadest parallels between the old man and Giovanna. His situation, the backstory of which is efficiently filled in during the film, was utterly unlike anything facing Giovanna. Moral decisions about life and death under conditions of extreme risk seem far more profound than the more mundane set of problems around whether or not to have an extramarital fling with a guy who’s leaving town soon anyway. It’s a story out of balance.

While the old man’s backstory is interesting, it raises a number of concerns which are only suggested, not fully developed. And the "lesson" that is articulated ("Don’t be content to merely survive"), while valid, isn’t given any fresh or original insight here.

Ozpetek gives the impression of a born filmmaker; his eye for color, light and dark, and the visual composition of his films is first rate. He draws sympathetic performances out of his actors and he develops stories that are grounded in interesting characters. What he has yet to do is to weave the elements together into a balanced and connected whole, less impressionistic and more carefully thought out in terms of structure and meaning.