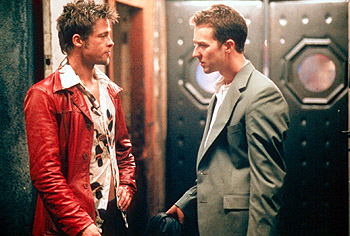 David Fincher&#146;s Fight Club (from a novel by Chuck Palahniuk) is about a special kind of male anger. It&#146;s the anger of single guys, night-owl guys, guys who work and fret and have nothing to show for it, guys who can&#146;t get laid or for whom getting laid doesn&#146;t cut it anymore. It&#146;s high concept agitprop about detached, anesthetized guys who float through their lives, and who see society as a bully, a prison, a form of castration. That&#146;s what Fight Club is about: powerless guys, lost guys, guys so far out of their groove that their outrage and despair have taken over what they mean when they talk about "Me."

A nameless narrator (Edward Norton) works for an auto manufacturer in a white-collar office job. He&#146;s followed all the right steps to the American Dream, but none of it is working for him &#150; not the job or the condo or the pricey designer furniture. He&#146;s lost inside an empty, mad consumer culture that represses any inkling of mortality or unhappiness. Depressed and insomniac, he begins attending support groups for addicts and disease patients, people whose genuine suffering makes him feel good enough about himself to get a night&#146;s sleep. But even this serenity isn&#146;t allowed to last for long: Marla (Helena Bonham Carter), a faker and interloper like the narrator, invades the meetings and by her presence destroys the one sanctuary left to him. It isn&#146;t until he meets Tyler Durden (Brad Pitt) that he really begins to come alive.

Tyler has a solution to all the clock-punching jobs and passive relationships and mindless pursuits. He believes that people have to strip themselves down, get zero-sum with themselves, and that only then can they become alive and authentic again. He steers the narrator into a new existence one night by telling him in a parking lot: "I want you to hit me as hard as you can." They begin to brawl, and immediately they realize they&#146;ve found a purgative for their frustrations. They brawl again, and over time, other men &#150; all kinds of men, from maitre d&#146;s and office wimps to dockworkers and plainclothes cops &#150; begin to join in.

But instead of resolving the questions it raises about the narcotizing effects of consumer societies, Fight Club veers off into the least interesting direction it could possibly take, and begins a simplistic worrying over the psychological cause for the narrator&#146;s deadness and anger. It makes too literal the war being waged inside his psyche, so that he winds up like those old cartoon characters who have a little angel and devil sitting on their shoulders, hissing moral instructions in their ears.

Norton works some subtle wonders in Fight Club, and his gray, doughy face is a perfect canvas for the narrator&#146;s exhaustion and exasperation. It&#146;s harder to say how good Pitt is. Tyler is a pure elemental force &#150; he&#146;s all Keyser Soze without any Verbal Kint to balance him &#150; and he has the worst lines in the movie. Pitt is at his best as a physical presence, prowling through the crowd in the velvety fight club scenes, watching his creation take form with pride and wariness. Carter is unrecognizable as Merchant-Ivory&#146;s golden girl, but she still has a put-on way of acting that exacerbates the literary nature of Marla&#146;s character. The garish, dipsy Marla works fine on the page, but it&#146;s hard to take her seriously when brought to life in Carter&#146;s fright-wig hairdo and elbows-akimbo postures &#150; she&#146;s Morticia Addams on training wheels.

While watching the men knock each other&#146;s teeth out in Fight Club, some women may find themselves eyeing their lovers and wondering, "Is some part of guys really like that?" The ending of Fincher&#146;s Seven roused many women to an eloquent condemnation, and these women aren&#146;t going to like Fight Club any better. It&#146;s only fair to point out that Fight Club is about womenless men; its central twist is based on the narrator&#146;s repressing his feelings for Marla. Fincher has made this point a little more oblique than it was in the novel, but he tries to seduce all of the men in his audience with the appeal of getting down and dirty with none but their own.

Even at its shallowest, the movie is fascinating to watch for its heat and movement. It&#146;s brimming with bravura touches, such as the narrator&#146;s living room turning into a living page from a furniture catalog, or sinuous, sliding shots through a van that&#146;s packed with explosives, or a montage of Scorsesian energy that&#146;s filled with dread-laden imagery. And Jim Uhls&#146; screenplay keeps intact almost all of the novel&#146;s knowing digs at our resolutely upbeat culture. The how-to cartoon-strip of airplane passengers placidly donning their oxygen masks in an emergency is juxtaposed with Tyler&#146;s pungent description of what such a situation would actually be like.

The Tyler who appears in Palahniuk&#146;s novel is never described, and we only hear his voice as filtered through the narrator. Giving him a face and voice (especially such familiar ones as Brad Pitt&#146;s) has the effect of Toto pulling the curtain open; it exposes Tyler&#146;s philosophy, not as a knife that can cut through all the crap, but as simply more crap. Uhls and Fincher try to gloss over the shallowness of Tyler&#146;s ideas by piling them up higher and higher, as if mere reiteration will make them more convincing. But Fight Club is really angry about the same things that The Simpsons lampoons every Sunday night; The Simpsons, however, doesn&#146;t rely on user-friendly cribs from Nietzsche or Hemingway to make its points. Under any other name, Fight Club would be called Nihilism for Dummies.