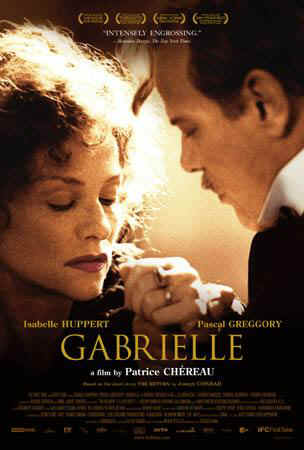 Other Chereau films reviewed at culturevulture.net:

Those Who Love Me Can Take the Train

Paris: 1912. A rainy afternoon. A sea of men in black emerging from a huge train station. "Today I’m coming home earlier than usual," one of them says in a voiceover. The speaker, M. Jean Hervey (Pascal Greggory), reaches his house,turns the lock, goes upstairs, and there on the table sits an unposted letterto him, from his wife, Mme. Gabrielle Hervey (Isabelle Huppert). She tells him she’s gone off with another manwho happens to bethe editor of the society paper her husbandowns.

And then Mme. Hervey returns–she’s changed her mind. Gabrielle shows what happens when a marriage cracks up. And what could be more noir and destructivethan infidelity and double dealing among theappearances-obsessed haute bourgeoisie? This isn’t the 18th century France of sexual fun and games, but one which values propriety at all costs.

Here he takes on people "who fear emotion and failure," and a couple forced to confront ugly truths when circumstances beyond their control yank them out of their comfort zones. And what comforts the Herveys enjoy: a big house complete with cooks, a passel of female servants, splendid clothes (including lots of evening wear designed by Caroline De Vivaise) and a smart circle of friends. Eric Gautier’s cinematography gives the film a seductive yet sinister look. This, after all, is the time of Proust, Freud, and Faure, just before The Great War, when conventions were questioned and uncharted depths plumbed.

But the Herveys and their set act as if nothing’s happening. What is said is not seen and what is seen is not said. And though Gabrielle could be described as a very talky film (the original story even more so), probing talk is a French specialty, especially when it explores the dangerous, ever-changing chambers of the heart, which Chereau, in keeping with Conrad, sees as a dark, forbidding place. Yet much of the film’s power comes from long takes and a pervasive use of silence.

Chereau is one of the few true auteurs in contemporary film and his acute feeling for the minutest gesture is on full display here. He getssuperlativeresults from his two stars, who, like highly refined and deeply aware musicians, use the full range of their instruments. A collapsed, defeated gesture, an unyielding hand, a grimace, a wordless rebuke, even a darting eye, speak volumes. And the long, concentrated scenes between them in their drawing room play like duets which aren’t quite duets, and monologues which aren’t quite monologues, yet very close to both. Chereau and his co-scenarist Anne-Louise Trividic pull characters out of Conrad’s descriptions: a maid (Mai David) to whom Mme Hervey unburdens herself, even the editor, who has no lines in the story, gets some here. He’s described there asan unattractive ass, and though he’s hardly good-looking, Chereau is wise enough to indicate that there’s something in him that Mme Hervey responds to. A less interesting director would just make him a cad.

But it’s the steadily drowning pair who command center stage. Kerry Fox and Mark Rylance’s sex in Intimacy was full frontal, the irony being that they keep their true identities under cover. In Gabrielle the tables are turned. The elegantly clothed Herveys couldn’t be more naked. This is a demanding and disturbing film, the only real flaws being the shifts from black and white to color and the use of blown-up excerpts from the text, which comes off as too self-consciously post-modern.