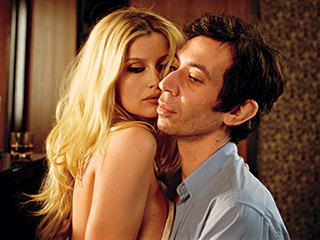 Born Lucien Ginsburg, the singer/songwriter Serge Gainsbourg was and arguably still is the most important musical talent to emerge in France since the Second World War. His career spanned more than three decades and more musical genres than any artist I can think of—in any country. Classically trained (his father, a Russian emigré, was a classical pianist), his work combined a gift for melody, a refusal to distinguish between high and low art forms, a finely-tuned ear for new pop idioms before they became popularized, an often infuriating irreverence, and lyrics that were pure genius. The wit and poetry of his lyrics were, in fact, frequently cited by the many famous and beautiful women who became his lovers as reasons why they fell for him. He was an outsized personality, a self-created and self-destructive superstar, an enfant terrible, an iconoclast provocateur, a notorious womanizer, and an even more notorious alcoholic. Although he continues to enjoy cult status in France more than 20 years after his death—a visit to his house on rue Verneuil or his grave at Montparnasse Cemetery is ample proof—Gainsbourg’s work remains largely unknown in this country. Sadly, a new film based on his life, “Gainsbourg: A Heroic Life” will do little to change that, despite the obvious reverence and considerable talent brought to bear.

“Gainsbourg: A Heroic Life” is not your standard biopic. Joann Sfar, who wrote and directed the film based on his own graphic novel, or bande dessinée in France, is obviously a talented artist with a deep understanding and sympathy for his subject. The unique strengths of this film are a function of that passion and talent. (The animated opening credit sequence is really good). But then so are the film’s failures. What must have been brilliant in the graphic novel actually undermines the effectiveness and emotional truth of the film.

The first half-hour of the movie—by far the best part—is a case in point. With breathtaking efficiency, Sfar establishes every theme that will inform and shape the trajectory of Gainsbourg’s life and career (according to Sfar), like pieces of an intricate and finely crafted puzzle. But what is intriguing and fresh in the first half-hour feels tedious, repetitive, and hollow by the last. This is the film’s greatest weakness: it is too clever, too pat; its depiction of Gainsbourg’s life and career is too cursory and simplistic, the characters too simply drawn. Facts that don’t fit the director’s thesis are omitted; emotions and events are depicted in narrative shorthand.

The film opens with pre-titles that show the child Lucien on a beach. He asks the little girl sitting next to him if he can hold her hand. She tells him he is too ugly and runs away (Theme 1: Gainsbourg is self-conscious about his gueule—his ugly mug—especially with respect to women). The film’s next scene then shows the young Lucien at the piano, scolded by his father for sloppy playing (Theme 2: Impatience with sacred cows, although a strong foundation in classical music will influence Gainsbourg’s pop music career.) The boy tells his father he has no interest in playing piano: “Why should I learn? You play and it amounts to nothing!” (Theme 3: Unlike his father, Gainsbourg is driven by a burning desire for success.)

This is also Nazi-occupied Paris and the Ginsburgs are Jews. In the next scene, Lucien is thrown out of a candy store. “You’ll get your filthy paws all over everything,” the proprietress scolds him. (See Theme 5 below.) As he wanders the streets, he sees a group of drunken militiamen singing “La Marseillaise,” whom he mocks (Theme 4: Irreverence for the State—foreshadowing the scandal Gainsbourg will ignite years later for his reggae treatment of the French national anthem, “Aux Armes, Etcetera”—combined with an overwhelming desire to be accepted by mainstream French culture). He then sees a classic Vichy propaganda poster titled “The Jew and France” depicting a bulbous caricature of a Jew (bulging, hooded eyes, hooked nose, multiple chins) sitting on top of the globe. The image materializes as a grotesque, gigantic puppet who chases the terrified Lucien (Theme 5: Gainsbourg is a self-hating Jew, traumatized by his experiences in an anti-semitic culture) until the boy tricks the puppet into mimicking his movements and following him in a silly dance, pied-piper style, before he shoots it with his toy gun. (Theme 6: Gainsbourg has the power to mesmerize through music and sheer charisma, but must kill the Jew within). You get the idea.

Now, don’t get me wrong. The puppet is cool. It’s a brilliant device and it gives us a very clear and concrete way to think about Gainsbourg’s self-hatred, his disdain for his heritage, his alleged anti-semitism, and his supreme confidence in his own talent. The problem is, that’s as far as it goes. This idea, which just took me a few sentences to encapsulate, is never developed or expanded upon. That’s it. That scene with the puppet tells you everything the movie has to say about Gainsbourg’s relationship to Judaism and to France.

It’s the same with Professeur Flipus, the other larger-than-life-sized puppet and the movie’s central conceit. When the boy Lucien invents him, it is to escape his own gueule (“He’s a really scary man, but very elegant.”) When this character plays piano, people stop to listen. (“He plays the stuff people like. Women mostly. He’s a ladies’ man.”) And suddenly Lucien’s piano playing becomes better, stronger, more emotionally powerful. The puppet functions as Ginsburg’s alter ego, the ideal Gainsbourg (who years later mutates into an even darker persona he calls Gainsbarre, the cabbage-head man, half man, half vegetable), the suave, bad-boy image he strives to attain, who goads the artist into the outrageous and cynical behavior that propels his career. Again, an ingenious construct and a very clever way to embody Gainsbourg’s demons and make sense of his cynicism, but it really doesn’t tell you anything beyond that. As the film progresses, it becomes clear this is the only character psychology the film has to offer. Eric Elmosnino, who plays Gainsbourg, might as well be a puppet himself; all that’s left for him is to go through the motions of Gainsbourg’s biographical highlights. There is no comprehensible motivation or depth to his character. That puppet, established ten minutes into the film, is it.

That’s a shame, because the actors in this movie are outstanding, despite the limited emotional depth the script permits. Both actors who play Gainsbourg are amazing. The young Kavey Mottet Klein conveys the child’s vulnerability and cheeky bravado with astonishing assurance; Eric Elmosnino embodies these same qualities, although obscured by celebrity, and perfectly captures the adult Gainsbourg’s mannerisms, vocal inflections, and too-cool body language, which mask a lifelong self-consciousness he can never quite overcome.

The women in Gainsbourg’s life, on the other hand, are consistently two-dimensional and disappointing. It’s probably no coincidence that the most successful is the character of Brigitte Bardot (Laetitia Casta)—who was already a kind of a caricature in real life. Not coincidentally, her best moment in the film is when she sings Gainsbourg’s “Comic Strip” in the nude. (Shebang! Pow! Plop! Whizzzz!) Jane Birkin (Lucy Gordon), the most important woman in Gainsbourg’s life and probably the only one he truly loved, comes across as a slightly dopey cipher, with very little to say or do except moon at her Sergio. It doesn’t help that Gordon does not really resemble Birkin beyond the hair and willowy physique. In a film where character is defined by appearances, this is a problem. Gordon’s portrayal is not the only one that falls flat; even the bull terrier Jane gives Serge as a gift is strangely lifeless.

But what about the music? The film weaves a great number of snippets of Gainsbourg songs into the fabric of the film cleverly, rhetorically, often so unobtrusively that, strangely, the music feels incidental. As though the idea of Gainsbourg’s music, the conduit to his celebrity, his women, and his booze, were more important than the music itself, as though his genius for self-creation were more important than his musical genius. I should add that the movie, made in France for a French audience, presupposes a familiarity with the songs that most Americans just don’t have. If you do not already know them, this movie won’t enlighten you much at all. And if, like me, you are a fan, their superficial treatment is likely to frustrate you.

But here’s the thing. Everything I have just described—the frontloading of symbols and motifs, the simply-drawn characters (caricatures), the shorthand, the puppets, the snippets of Gainsbourg songs—is a function of the film’s origins as a graphic novel, and a brilliant solution to the constraints of that medium. “Gainsbourg: A Heroic Life” is a postmodern live-action cartoon—in which psychological depth and complexity, motivation, and even dialogue have been compressed and displaced, when not stripped out entirely—and then expanded into a feature film. What by definition could not be conveyed in the original medium—depth, complexity, contradiction, nuance—is glaringly absent from this one.

A life is a tricky thing to capture in any medium, but it is especially hard to do in a cartoon. A life is complex, multifaceted, contradictory. Sprawling, it can take a lifetime to make sense of, if ever. But that was never the point here. If you stick it out to the end, Sfar explains it quite clearly in an end-title in which he quotes himself: “I love Gainsbourg because he transcends reality. It’s not his truths that interest me, but his lies.” So there you go. It’s not the reality of the life that matters; it’s the storyboard. That’s the point: Gainsbourg was a superhero in his own comic strip. (And really, how else to make sense of the film’s title? There’s certainly nothing else heroic about the life it depicts). Which makes the song “Comic Strip” the film’s thematic center. Shebang! Pow! Plop! Whizzzz!