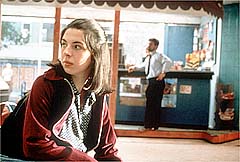 Getting to Know You has a somewhat jumbled story to tell, weaving together a mixture of material from Joyce Carol Oates short stories. Director Lisanne Skyler, who also co-wrote the screenplay, uses both flashbacks and stories within the story, a somewhat awkward structure that seems unnecessarily forced.

But Skyler’s ambitious, in-depth look at painfully dysfunctional family relationships, as seen from the point of view of teenaged youngsters, is thoughtful and emotionally convincing. This is a film about teenagers that treats them sympathetically, as real and complex people worthy of serious consideration. In that alone, it commands respect, especially as compared to the teen nonsense that emanates like so much rancid sausage from the Hollywood marketing grinders. The irony, of course, is that while the Hollywood product fills the screens of the multiplexes, Getting to Know You has as yet failed to find a distributor.

Sixteen year old Judith (Heather Matarazzo) is the axis around which the action turns. She and her brother Wesley (Zach Braff) are waiting in a small town depot for buses that will take them in different ways – he off to college, she to a group home where she is living since her mother has been institutionalized.

Another teenager is also at the bus station, Jimmy (Michael Weston), a fast talker who draws Judith into conversation. Jimmy has his own story of emotional pain which gradually unfolds, interlaced with imaginative tales he weaves for Judith and flashbacks that flesh out the story of Judith and Wesley’s family.

Perhaps the strongest theme that threads through the various strands of narrative here is the powerlessness of youngsters victimized by parental mistreatment. In the case of Judith and Wesley, their parents yearn for a fantasy world of imagined glamour, but instead get bogged down in marginal jobs, petty crime, alcohol, and domestic violence – their kids some extra baggage they got stuck with along the way. In one of Jimmy’s tales, a tyrannical father bullies his son unmercifully – too much attention (of the wrong kind) contrasted with neglect. Jimmy’s own story is another variation on the theme.

The film explores how the kids react to circumstances they did not create, over which they have no control, and finally, which sometimes force them to take action – to make decisions for themselves as adults.

Matarazzo’s Judith is subtly played. She is observant of what goes on, wary, even – she’s seen a lot and has had her share of disappointment and disillusionment. She’s vulnerable, but she’s also clear-eyed. There’s hope in this portrait of a young woman who learns from bitter experience, but can still allow some emotional availability, still has the strength to take a risk.

Braff gets less to do and the retreat/escape by Wesley into his studies seems exaggerated almost to satire. Michael Weston finds just the right balance of boyish charm, hiding his defenses behind his gift of gab, his hunger for a connection battling with his bruised emotions. Bebe Neuwirth, always an intelligent performer, captures both the fantasies and the follies of the mother, and Mark Blum is painfully accurate as the violent father.

Getting to Know Youtries to cover too much territory and, in doing so, dilutes its effectiveness. But Lisanne Skyler does so much right here that the film will earn fans – if it ever gains wider distribution.