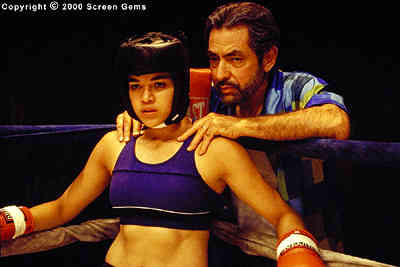 Ever since the Rocky franchise hit pop culture paydirt in the mid &#145;70s and put "feel-good" cinema irrevocably on the map, cineplex screens have been clogged with variations of the same old song and dance. The odds are always stacked against the hero who must overcome seemingly insurmountable obstacles to be proved worthy. In the subset of this genre involving sports, countless training montages showcase perseverance in pursuit of the athletic goal. Finally, in a moment of truth, grounded in a final championship go-round, heights are attained that neither man nor beast thought possible. Goodness, purity of heart and good old-fashioned blood, sweat and tears triumph over all. Roll credits.

Girlfight, the toast of this year&#146;s Sundance Film Festival reads like a typical tale-of-the-underdog on paper. Diana (Michelle Rodriguez), a Brooklyn tough girl with a major chip on her shoulder, begins training to be a boxer under a very skeptical trainer (Jaime Tirelli). Initially scorned and mocked, she eventually gains the respect of the gym people and a handsome fellow amateur pugilist (Santiago Douglas). Showing a hard-earned talent in the ring, she wins a few preliminary bouts and ends up squaring off against the one person she&#146;d never want to hurt.

At first glance, it’s another by-the books detailing of the triumph of the human spirit. Guess again. An outstanding film in all respects, one of the best things about Girlfight is the way it subverts the "feel-good" genre of sports films without attempting to be a revisionist or radical reworking. There&#146;s nary a scent of the hallmark treacle or saccharine sentimentality inherent in these works, as first-time writer/director Karyn Kusama opts instead for a gritty, naturalistic approach that compliments and enhances the material. Kusama’s penchant for unfettered realism doesn&#146;t clash with the fairy tale elements of the premise; if anything, the substitution of street sounds for sweeping string sections heightens the dramatic narrative curves.

Portraits of the working class in these films usually go the route of either the "noble savage" poverty line ("We&#146;re poor, but ain&#146;t we got heart") or condescending tragedy. Here, the tragic character, the abusive father of the protagonist (Paul Calderon), is fleshed out past an easy stereotype into a fully three-dimensional person.

The athlete’s victories seem significant without the necessity of a musical cue; Kusama&#146;s choices of a verite style and mostly unknown actors imbue the film with a personal feel that rings with emotional authenticity.

Those "unknown" actors who populate the cast of Girlfight won’t be unknown much longer. Tirelli&#146;s grizzled and cautious trainer never slips into a cantankerous caricature. Santiago Douglas, all boyish good looks and charm, does wonders with the stock role of the significant other who becomes Diana&#146;s rival in the ring. (The irony of his character being named Adrian, the same name as the passive female of the Rocky films, is not lost). Veteran New York character actor Paul Calderon eschews broad strokes in portraying Diana&#146;s father, accenting the character&#146;s malevolence more acutely by playing it close to the bone.

But it&#146;s Michelle Rodriguez who emerges as the major find here. Picked from an open casting call and with no previous acting experience under her belt, it&#146;s impossible to think of anyone playing the role better. Whether hitting the body bag or idly flipping through television channels, she communicates anger and frustration with a naturalism that is startling. With her choices in life limited, Diana finally finds the self-esteem and empowerment she craves through boxing; Rodriguez&#146;s simmering-beneath-the-surface performance makes it believable. From her first appearance to the film&#146;s final freeze frame, a close-up in which her searching eyes and scarred knuckles stay equally in focus, it&#146;s her show all the way and she delivers the goods. Strikingly attractive one moment and fearsome a second later, magnetic and graceful in her physicality, it&#146;s impossible to take your eyes off of her.

In a film genre known for its comforting predictability, Girlfight soars by refusing to take the road most traveled. It still qualifies as a "feel-good" film, but it refuses to cop out with easy answers or false epiphanies; even the requisite happy ending is laced with a bittersweet melancholy. An organic, unforced feel underlies Girlfight, and the sense of empowerment that drives it never falters in communicating one person&#146;s journey to well-earned bliss.