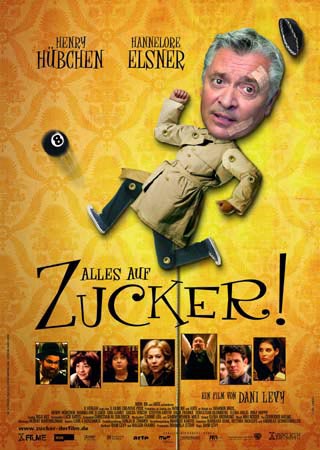 The surprise runaway hit film of the 2005 season in Germany, Dani Levy&#146;s Go for Zucker, won Lolas (German Oscars) for best film, best director, and best actor, trumping the internationally acclaimed Downfall. Both films broached long-standing taboos in German media treatment of subject matter relating to the Holocaust. In Downfall Bruno Ganz presented a Hitler of human, rather than mythic-monstrous proportions. In the comedy of manners, Go for Zucker, Dani Levy reintroduces the long-standing tradition of (pre-Nazi-era) Yiddish humor in German-language stage and film. Levi enriches his tale&#151;and embellishes the joke-telling&#151;by lampooning contemporary German-Jewish life. The mirthfully awkward reunification of brothers Jakob (Jackie) and Samuel Zucker becomes a send-up of the sharply contrasting values between post-reunification East and West Germans, as well as German Gentiles and Jews. (The original title Alles auf Zucker! is a word play that means both "all bets on Zucker" as well as "everything sugar-coated.")

Henry H�bchen stars as Jackie Zucker, former sportscaster and East German media star, an inveterate gambler, liar, and schemer in the grand Yiddish comedy tradition (familiar to American audiences in the Hollywood tradition of the lovable rascal, from the Marx Brothers to Mel Brooks and beyond). Indeed, much of Go for Zucker is a vehicle for H�bchen to explore this character. Jakob Zuckermann may have shed his Jewish identity when his mother and brother fled to the West in 1961 (when the Berlin Wall went up), and he may be given to self-pity, having lost fame and fortune, fan base and career, when the East German system collapsed. Jackie may be a rogue, a two-fisted drinker, a smart ass, and a pool shark, as well. But he is the complete mensch&#151;big-hearted, resourceful, life-loving, a kind of Berlin-Jewish Zorba the Greek. As he says of himself, "I&#146;m a born player and life is a game."

As it happens, Jackie is up to his ears in debt, his wife has thrown him out and is threatening divorce, and his son, who is the branch manager of a bank (and a fastidious individual, that is to say, a sexual virgin), has shown up at Jackie&#146;s door with the court bailiff. It seems Jackie missed the payment deadline on a loan of &#128;44,500. And, it seems, he has some financial complications with the Club Central, a Berlin "establishment" for lonely hearts and unreconstructed East Germans. Jackie explains to his wife that he is the club&#146;s accountant. (Explanations become necessary when brother Samuel is discovered finding ecstasy-imbued joy in the arms of the club&#146;s Palestinian "escort.")

Jackie has resolved to solve his financial problems by entering the Fifth European Pool tournament and, on his way out the door to compete, a telegram arrives from Frankfurt. Suddenly, there is also the slightly complicating matter of news of his mother&#146;s death, her will, and certain stipulations surrounding the payout of the inheritance. Jackie must reconcile with his long-estranged brother Samuel, who lives with his own family in Frankfurt. It just so happens that brother Samuel&#146;s family is strict (well, sort of) orthodox, keeps kosher, and as full of mixed nuts as Jackie&#146;s family.

In Berlin, Jackie lives with his gentile wife Marlene. Leading German actress Hannelore Elsner delivers a strong, on-target performance as the scrappy, pragmatic survivor of her husband&#146;s antics, every bit as creative and irrepressible in her own way. Daughter Jana (Anja Franke), once daddy&#146;s little girl, has not been on speaking terms since she gave birth to Sarah. Everyone assumes son Thomas (Steffen Groth) is gay, oblivious to Jana&#146;s relationship with her live-in lesbian lover.

Samuel (Udo Samel) is shorter, stockier, but every bit as stubborn as Jakob. His big-bosomed, big-hearted wife, Golda, is played by Golda Tencer. Tencer is considered the "grande dame of Yiddish song," and delivers a memorable over-the-top performance here. Their dour and self-righteous son, Joshua (Sebastian Blomberg), will prove to be less orthodox than his firmly clenched facade. Daughter Lilly (Elena Uhlig), a self proclaimed "princess," has been in law school for ten years. But she has never let that get in the way of her primary hobby, seducing men.

While some of the sexual taboos presented here may offend American sensibilities, they are right in line with the madcap, no-sacred-cows approach of this film. The humor, in both subtle and slapstick varieties, is fast-paced. Audience members unfamiliar with either contemporary East-West German relations or German-Jewish-Gentile dynamics may find the film moves rather too quickly as they try to keep up with the subtitles. But the message comes through mirthfully loud and clear&#151;how much would anyone risk when taking a gamble for love and life?