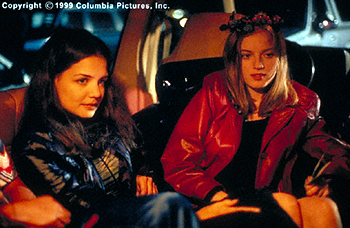 Blue Lotus of the Nile

Pure dried flowers and nothing else

Director Doug Liman’s filmography to date consists of two comedies about trendy young people in Los Angeles, each featuring a side trip to Las Vegas. Yet anyone watching them back-to-back would be hard pressed to peg them as the work of the same person. Swingers, Liman’s 1996 debut, was a wry, low-key marvel of observed behavior. Its lounge culture trappings may have been the selling point, but the film’s deadpan humor sprang from its faithful depiction of the ground-level desperation for personal connection among struggling Hollywood twentysomethings. When one character repeatedly calls the answering machine of a woman whose number he acquired scant hours earlier, the result is a deftly mixed cocktail of hilarity and embarrassment that packs an emotional wallop.

By comparison, Go is a slicker, more superficial piece of work. Its pumped-up techno soundtrack, hell-bent pacing and attractive young cast of Dawson’s Creek and Party of Five heartthrobs flagrantly court the burgeoning teen market that made hits out of Can’t Hardly Wait and the Scream series. Yet that young audience failed to turn out in sufficient numbers to make Go a hit on its release in the spring of 1999, thereby missing out on the freshest, wittiest, most exuberant ensemble youth comedy since Dazed and Confused.

Structurally, Go resembles a short story anthology, with each of the stories jumping off from the same point and all three coming together at the end. In the first, supermarket checkout clerk Ronna (Sarah Polley) picks up an extra shift from co-worker Simon (Desmond Askew), landing his side gig as a drug dealer in the process. The second part follows Simon and his friends to Vegas, and the third concerns soap opera actors Adam and Zack – two of Simon’s regular customers. Pulp Fiction is an oft-cited antecedent for this juggled chronology, though a more exact comparison might be the rewinding narrative strategy employed by Stanley Kubrick in The Killing. This device lends Go the giddy rush of a night at the amusement park; there’s barely time to catch your breath after one ride before the next one begins.

All three stories are driven by impulsive characters who evade responsibility at all costs and think on their feet when they bother to think at all. On the verge of being nabbed by an undercover cop, Ronna flushes the drugs she has acquired on credit from creepy dealer Todd Gaines (Timothy Olyphant) and replaces them with allergy medication. Simon and his buddies hit Vegas for an evening that includes a menage a trois, a hotel room fire and a harrowing car chase down the Strip. Adam and Zack escape an increasingly bizarre dinner party, only to end up dealing with a hit and run accident. Liman has assembled a lively and engaging cast (standouts include Polley, Taye Diggs as one of Simon’s Vegas cohorts, and Scott Wolf and Jay Mohr as the bickering Adam and Zack), and he takes his directorial cues from their anything-goes characters. Acting as his own cinematographer, Liman shoots on the fly, and the resulting freedom creates a propulsive forward momentum that sweeps oddball side trips – such as a mid-supermarket Macarena dance number and a visit from a telepathic cat – into its flow. By the time the outrageous Vegas segment arrives, we’re prepared to accept almost anything – which is pretty much what happens.

Go strives to be nothing more (or less) than a hit of cinematic Ecstasy. Its theme can be summed up with George W. Bush’s dubious campaign mantra, "When I was young and foolish, I was young and foolish." No lessons are learned in Go, and nobody really gets hurt. This will no doubt strike some as a cop-out, when in fact it’s the whole point of the movie – to capture that youthful energy and fleeting sense of immortality like lightning in a bottle. If in the end it fails to elicit the shocks of recognition that Swingers delivered, Go nonetheless supplies a welcome dose of good old-fashioned decadent fun to anyone in need of a quick fix. Just watch out for those mind-reading cats.