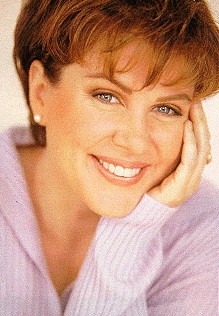 Guerrilla Tactics to Help You Win the Fight of Your Life

Through Cancer, Chemotherapy and Coping

CV admits upfront that Julia Sweeney has not previously crossed our radar screen and, further, that we find one-person shows on film to be rather claustrophobic. (Ten minutes with Spaulding Gray and we run in panic for the nearest exit. )

Good news here. God Said "Ha" is a wise, funny, immensely entertaining hour and a half spent with a woman of spirit and verve, a woman whose will to live and find the best in life is a deliciously understated inspiration.

Sweeney, after a divorce, had no sooner moved into her Los Angeles dream house than her brother was diagnosed with lymph cancer. She invited him to stay at her house and, not long after, their parents arrived in town to take up residence as well. Sweeney was herself diagnosed with cervical cancer even while the family was coping with her brother’s chronic and heartbreaking decline. Those events are the backbone of her monologue.

In other hands, this material could easily be brutal, depressing, and not exactly what you had in mind for an evening’s entertainment. But Sweeney has found and perched on that very fine line of telling about awful truths while sharing lessons learned from them, without being preachy, or self-righteous, or self-pitying in the least; on the contrary she plays it lightly and humorously, gently satirizing but never condescending to or disrespecting the subject matter.

Sweeney developed the material initially in stand up comedy routines, expanded it from there to a 45 minute club show, and once again into a full stage production. She premiered the full length version in San Francisco in 1996 to sold out houses, then ran it for four months in Los Angeles, and six weeks on Broadway. The film is a straightforward filming of the stage play, with no attempt to open it up or do more than record this extraordinary performance. (The only production aspect that has a negative effect in the film could be easily corrected – the use of music over her monologue in several places is obtrusive and distracting.)

Although there has, perhaps, been some progress in recent years, cancer and other terminal illnesses are still very poorly dealt with in American society. Denial, as the clown says, in not a river in Egypt. CV can remember (and it is probably still true with some folks today) when cancerwas so terrifying that people wouldn’t use the word. "Oh, she has it!" And if illness is a hard one for us, dying and death are beyond the pale.

Well, life is a terminal illness, as the mot goes. And good gallows humor needn’t be cynical or insensitive; Sweeney proves it can be real and healing. Hard to imagine before seeing Julia Sweeney that a line like, "I love my shunt!" can be laughed at without guilt and without lessening the seriousness of the situation.