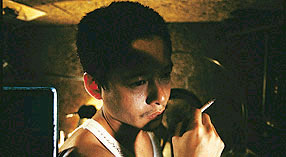 Goodbye Dragon Inn is Taiwanese filmmaker Tsai Ming-Liang&#146;s attempt to commit Taipei&#146;s Fu-Ho movie theater, a one-time cruising spot for gay patrons, to cinematic memory before it is torn down. Pervasive in its nostalgia, the movie is interspersed with clips from King Hu&#146;s 1966 wuxia classic Dragon Inn. Playing on the theater&#146;s last night, the King Hu picture attracts only a few dozen audience members. Every one of them appears to be a lonely soul wandering in out of the pouring rain (the natural meteorological state in a Tsai film).

The entire movie takes place at the theater, all the major characters remain nameless, and there is only the barest hint of a plot. The lame-legged ticket clerk (Chen Shiang-Chyi) is trying to find the projectionist (Lee Kang-Sheng, Rebels of a Neon God, The Hole) in order to give him a steamed bun, and a gay Japanese audience member (Mitamura Kiyonobu) searches for affection.He goes about looking for someone to light his cigarette, but everyone seems to be in his own private world.A lit cigarette in the projection booth is the only sign of Lee Kang-Sheng&#146;s presence until very late in the movie.All of Tsai&#146;s regular themes appear here &#150; existential disconnect in an urban environment, alienation from other human beings, and sexual frustration &#150; but here he treats them as auteurist sign posts whereas he delved into them more deeply in his earlier films.

Goodbye Dragon Inn is ostensibly a comedy, but the jokes are delivered in the most deadpan, inert ways imaginable. Even then, most of them are wildly contrived. Kiyonobu is always the butt as he suffers through multiple invasions of personal space &#150; bare feet rudely propped over a seat, squeezing past strangers in dark, dank aisles leading to the supply room, being crowded between two men at the urinals (in perhaps the longest scene of urination in cinematic history outlasting even History of the World, Part I and Austin Powers: International Man of Mystery).The minimalist slapstick (and this is Tsai at his most minimalist) is certainly an acquired taste, so anyone who isn&#146;t already a fan of Tsai, Aki Kaurismaki (The Man Without a Past), or Jim Jarmusch (Stranger Than Paradise) is forewarned.

Liao Pen-Jung&#146;s photography evokes Tsai&#146;s last feature, What Time Is It There?, utilizing high contrast lighting and lots of shadow resulting in isolated pockets of warmth amidst cold, dark surroundings. For Tsai, that&#146;s what the theater represents–a soon to be lost aesthetic shelter.Goodbye Dragon Inn is nothing if not about capturing a sense of place.Each frame is a photograph used to memorialize the texture of every ancient, crumbling crevice.Long after most other directors would cut, Tsai continues to hold each take. One shot of the auditorium lingers on as if to savor every last moment Tsai can share with it.This is a movie about setting; viewers prioritizing plot and character will likely run screaming.The first of the movie&#146;s eleven lines of dialogue doesn&#146;t arrive until the halfway point.

The meticulous sound design contributes every bit as much as the visuals to the overall impression.As Chen travels the halls, reverberations from Dragon Inn come from one wall while rain and traffic noises emanate from the other.More than anything else, the sound makes the film come alive.

Though the movie and its subject no doubt mean a great deal to Tsai, Goodbye Dragon Inn is his slightest feature yet and perhaps a certain torpor has set into his direction.However, his work has been of such sustained quality that a drop-off only means a good movie instead of a great one.