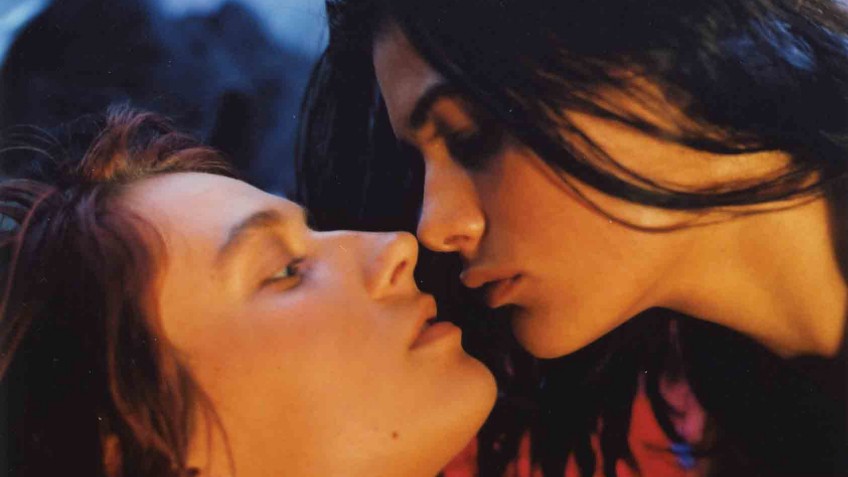 The Slovenian film Guardian of the Frontier is an exceedingly strange movie. On the surface, its story about three beautiful young women facing possible menace on a canoe trip sounds like a female version of John Boorman&#146;s Deliverance. The high production values of Maja Weiss&#146; first feature film is misleading however because outside of its gorgeous visuals, Guardian of the Frontier feels like something Russ Meyer (Beyond the Valley of the Dolls) could have directed or Roger Corman (Death Race 2000) could have produced. Typical of B-movies, Guardian sports retrograde music by Stewart Dunlop that recalls everything from The Good, The Bad, and The Ugly to Friday the 13th. The movie has nudity verging on the gratuitous as two of the women opt to paddle down the river Kolpa topless, and they later engage in a lesbian tryst. A la Meyer, Weiss tosses in outrageous phallic symbols (an oar masquerading as a penis silhouette, a fishing rod held from the crotch, and long-bodied fish intercut with the lower torsos of the women swimming) and she even trots out a blithering fascist caricature. Heavy-handed use of ominous music and a high-pitched, tone verging on the absurd add to the B-movie atmosphere.

What is unlike a B-movie is the look. Director of photography Bojan Kastelic captures all the sumptuous greenery, the mist over early morning water, and nature&#146;s own cobblestone streets immersed below. The actresses are no less beautiful. Pia Zemljic plays &#142;ana, a bold, dark-haired provocateur sporting a nose-ring. Tanja Potocnik is her more level-headed and red-headed best friend, Alja. Iva Kranjnc fills out the trio as blond, sunny, cute Simona. The tension among the friends comes from &#142;ana&#146;s inability to abide Simona&#146;s innocence, which &#142;ana sees as an act, and from &#142;ana&#146;s lusting after Alja, who has a boyfriend, Medo (Gorazd &#142;ilavec). As the three college students on break begin their canoe trip, Weiss engages in over-the-top foreshadowing &#150; portentous music, shots of graves and a spooky old man, hunters&#146; rifles going off &#150; and on the way to the river, the women hear about a homicidal rapist on the loose in the woods.

Weiss mixes in not-so-subtle political themes, primarily pitting open-minded progressiveness against intolerant conservatism. The former is represented by nose-ringed &#142;ana, who studies journalism, and tattooed Alja, who studies literature, and the latter by clean-cut Simona, who studies economics, and the Guardian of the Frontier (Jonas &#142;nidar&#154;ic), a homophobic and xenophobic politician who espouses nationalism &#150; in effect, responsible media and art vs. reductive number-crunching and political corruption.

While &#142;ana and Alja make friends with Croats and toast to crossing borders, Simona flees. She finds the Guardian alluring even as he announces, "Progress is destroying the world," and scapegoats homosexuals and foreigners as immoral. This would all feel ridiculously pompous if Weiss&#146; tone didn&#146;t imply the movie is really a darkly comic genre masquerade on the level of Starship Troopers and if &#142;ana and Alja were not such disagreeable characters.

Not all of Weiss&#146; moves are so heavy-handed. Early on, &#142;ana swims across the Slovenia-Croatia border, demonstrating the abstractness of human-imposed boundaries with a simple gesture that does not call undue attention to itself. Only belatedly does it become clear that a sandal that could belong to either a rape victim or a refugee acts as a metaphor that equates the two. Alas, Weiss flounders near the end, opting for unsatisfying ambiguity over a more consistent and coherent emotional resolution. Guardian of the Frontier is an otherwise remarkable and refreshingly unusual film.