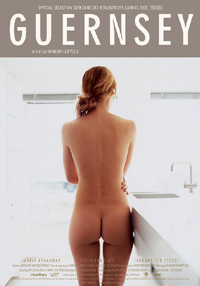 Director and screenwriter Nanouk Leopold renders an almost Zen-like meditation on the psyche of a young woman Anna (Maria Kraakman)–wife, mother, daughter, irrigation engineer, and the survivor of a colleague&#146;s suicide. Anna has married her older sister&#146;s boyfriend Sebastian (Fedja van Huet). They live with their son Kees in suburban Holland. Anna frequently travels abroad for work, and when overseas lives in a compound for professional-class Europeans guest-working in Egypt. The suicide had been an intimate stranger, a fellow Westerner working in Egypt, and only afterwards does Anna come to know well the husband-survivor of the suicide, Dr. Verkerke (Frank Vercruyssen ).

Back in the Netherlands unresolved family tensions constantly percolate between Anna and her older sister Bobby (Johanna ter Steege), between them and their wealthy widowed father, and between Anna and Sebastian. (Van Huet&#146;s Sebastian–loving father, poor doctoral student, and bird-watcher–is about the only warm and likable character in a family full of poorly suppressed rivalries.) Long, complicated family relationships telescope down into terse remarks, familiar domestic shorthand for such family dynamics. For example, Anna&#146;s sister Bobby remarks, when they learn that their father is selling his mansion in Holland to buy a place on the island of Guernsey and move there with his current trophy wife, "It&#146;s a tax shelter, so you can make even more money."

Guernsey pointedly suggests Tarkovsky&#146;s Solaris, wherein cosmonaut Kris Kelvin arrives at a human space station, now strangely desolate, yet haunted, hovering above the ocean planet Solaris. Discovering that one of the original three scientists on the station had committed suicide, Kelvin soon encounters his dead wife reemerging from the shadows, and the planet itself begins to emerge as a consciousness. Leopold coolly transposes Tarkovsky&#146;s metaphor of the human psyche at war with itself to a seemingly mundane, middle-class milieu.

Guernsey Director Leopold makes frequent use of wide angles and long shots, often splitting the screen visually into two-paneled diptychs. In one frame, for example, Anna is shown on the left showering in the same stall in which she had discovered the corpse hanging by a noose; on the right side of the screen, a bank of all-white tiling, fixtures, and hot-water apparatus articulate the ineffable feelings of silent menace, not as dynamic, but as inert built-ins. The blandly repeating ticky-tacky wasteland of suburban architectural sprawl similarly serves as contrast to the little drawing room dramas. The gathering of humans into small configurations of domestic drama is oft repeated, juxtaposed against sleek, cold, high-tech architectural features. Unlike the puritanical sensationalizing of David Lynch&#146;s Blue Velvet, Leopold&#146;s no-nonsense Dutch approach strips the film of any pretense and leaves the responsibility of interpretation to the viewer. In this, Guernsey strongly recalls new-wave new-novelist Allain Robbe-Grillet, as for example, in The Voyeur.

Following her colleague&#146;s suicide, Anna begins to withdraw emotionally from the world, and the camerawork mirrors this physical distancing and emotionally tunneling effect. Even as Anna remains unconscious of the depth of her withdrawal, Leopold skillfully and self-assuredly draws the audience in, using the sparse and understated timbre of classic French new wave. As Anna becomes the psychological observer of herself, she also becomes a voyeur, spying on her family members. Becoming an outsider witness to her own domestic dramas, she discovers but slight transgressions, milder even than her own neurotic peeping. So too, between the very slow pacing and the very broad visual expanses, the audience becomes aware of its position as cinematic voyeur, invited by the director to indulge their own voyeuristic self-pleasuring, and to join in the meditation exercise.

(4444)
$8.98 (as of January 24, 2021 - More infoProduct prices and availability are accurate as of the date/time indicated and are subject to change. Any price and availability information displayed on [relevant Amazon Site(s), as applicable] at the time of purchase will apply to the purchase of this product.)
related posts