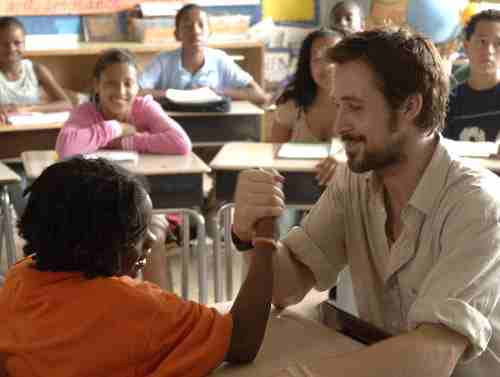 In Dead Poets&#146; Society, teacher John Keating (Robin Williams) is the romantic-heroic rebel who inspires his scions of ruling-class wealth to throw off the shackles of noblesse oblige. In Educating Rita, professor Dr. Frank Bryant (Michael Caine), cynical and alcoholic, is restored momentarily to life when challenged by Rita (Julie Walters), a bright, working-class self-starter and good-looker, in a kind of Pygmalion set in the classroom. What Half Nelson, written by Ryan Fleck and Anna Boden and directed by Fleck, has most in common with these antecedents is an unwavering faith in transformative change through education.

In the age of a politically numbed out America, where the machinery of power relentlessly dumbs down the public and erodes public education, Half Nelson offers a sensible, wise, charming, cunning, sobering object lesson in what is going on in the world–both how people actually live their lives and why change must be embraced and not merely endured. Think Film Company&#146;s new release tackles thorny philosophical questions head-on, confidently demonstrating that complicated philosophy is within the reach of everyone.

Idealistic, white, middle-class Dan Dunne (Ryan Gosling) is a seventh-grade history teacher at a mostly Black public school in contemporary Brooklyn. He coaches girls&#146; basketball after-hours. He has a serious and growing drug addiction problem. He also happens to believe that understanding history is important, life-alteringly important, and that even most thirteen-year-olds can grasp and appreciate Hegelian dialectics.

Indeed, director Fleck lays bare the principle of dialectical change by incorporating directly into the plot Dunne&#146;s classroom lectures, slightly paraphrased from Fleck&#146;s own father&#146;s web site (the senior Fleck is a "dialectics autodidact") on Hegel and the American civil rights movement of the 1960s. Lest this be mistaken for preachy theorizing, the plot structure itself embodies some of the very dialectical tensions shaping American society today. Dan Dunne is not just white and middle-class, but the child of Nixon-era anti-war activist parents, who have resigned themselves, drifting into alcoholism and cynical disillusionment with American politics.

Dan himself is unable to rise above the tension between his faith in democratic egalitarianism and his own lack of faith in himself (he is a drug rehab drop-out). As he acts out his romantic-heroic rebellion against authority and its public school-mandated history curriculum, he drifts into the infantilizing fog of addiction. It becomes difficult to say at what point principled protest becomes reactive acting out, the (self) oppressed merely lashing out impotently against authority. In the midst of his private despair, Dunne befriends one of his students, bright, thoughtful, vulnerable, thirteen-year-old Drey (Shareeka Epps). Drey&#146;s mother is a member of the working poor, an EMS attendant. Drey has a brother in prison. And her father figure, Frank (Anthony Mackie), is drawing her professionally into his world of drug dealing. Seeking an alternative father figure, Drew is at first powerfully drawn to Dunne, her teacher and coach. But she soon becomes caught between attraction and repulsion as she witnesses Dunne&#146;s addiction and becomes pulled closer into his addict&#146;s life against her will.

Rather than sinking into sentimental cliches, both Dan&#146;s and Drey&#146;s characters are intelligently drawn. Realistic emotion, quirky wit, penetrating political insight, and frequent improvised acting provide for dynamic performances from both Gosling and Epps, who play off each other as naturals. Each character in this film and each narrative thread manifests the dialectics of change, whether Hegel&#146;s historical dialectic or Marx&#146;s economic dialectic. Rather than moralizing about systemic or individual failures, Half Nelson asks the viewer to consider America&#146;s history anew, and try again. Philosophically sound, dramatically absorbing, highly entertaining and highly instructive, Half Nelson is hands down one of the best films of the year.