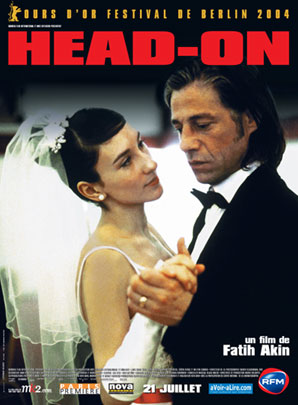 Head-On, a gritty and powerful film from Germany, opens with a Turkish band and singer (Idil �ner) rendering melancholy popular Turkish music along the shore of the Bosporus, with Istanbul and the Blue Mosque in the background across the water. Director Fatih Akin returns to the band and the setting from time to time during the film to indicate the passage of time between scenes, as well as to reiterate the powerful draw of the traditional sounds and emotions.

A quick cut to a club in Hamburg provides vivid contrast. Cahit (Birol �nel), a Turkish-born German citizen, works picking up empty bottles at the club, about as low on the totem pole as it gets. Punk music blares on the soundtrack. Cahit’s a shaggy, long-haired, bearded drunk and drug-abuser, full of anger, hostile, nasty, and violent. Later, he attempts suicide by driving his car head-on into a wall, but he survives, finding himself in a psychiatric facility, his neck in a brace.

There he meets another suicidal Turk, Sibel, a young woman living with her traditional Turkish family in Hamburg. She wants to live the liberated, hedonistic life, but is tightly controlled by her domineering father and brother–the latter broke her nose when he learned she kissed a man. (The double standard of Turkish men is made clear. They have no compunction about going to whores for sex themselves, but their wives are on pedestals of purity; even reference to a Turkish wife in the mildest of sexual contexts is taken as a breach of honor with serious consequences.)

Desperate to escape from this repressive situation, Sibel begs Cahit (on first meeting) to marry her, a marriage of convenience only, which will free her of her family. He’s Turkish, so, despite misgivings in the family, they are wed in a grand traditional ceremony.Sibel moves into Cahit’s apartment, but maintains her independence from him, as she pursues a life nearly as self-destructive as his.

Inevitably the two are drawn to one another, but Akin, who also wrote the screenplay, is not telling a simple love story here. He explores the discord between European and Muslim values, between old ways and new, between generations. Sibel and Cahit share the resulting dissociation and the anger and self-destructiveness that erupt from their conflicted position. With powerfully developed characterizations and keen observation, Akin doesn’t settle for a formulaic resolution. He takes neither the obvious path to tragedy nor a Hollywood escape into an unrealistic happy ending, but he ends his narrative on a bittersweet and ambiguous note that respects the more realistic messiness of human lives.