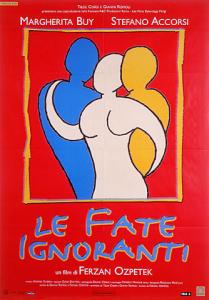 as a rich country pate

Ferzan Ozpetek’s first film, released in the U.S. as Steam, was a small triumph, an atmospheric tale placed in an exotic locale, with appealing, well developed characters. Ozpetek, who is a Turkish expatriate living in Rome, made a second film, Harem Suare, which apparently never found a U.S. distributor. Now comes his third, called in Italian Le Fate Ignoranti and vapidly renamed His Secret Life for release in the U.S., although the onscreen main title is correctly translated. Le Fate Ignoranti means "ignorant fairies," which, as a title, presumably was considered by Strand Releasing to be dangerous for marketing purposes as well as, perhaps, too susceptible to being labeled "politically incorrect."

But the title, as it turns out in the film, is the Italian name for a book of poetry by Nazim Hikmet, a leading 20th century Turkish poet. And the book plays a not insignificant part in the plot, helping to create a bond between the two lead characters; a poem is even quoted at some length. Ozpetek’s title (whether fictional or real) is surely more appropriate than its timorous substitute.

The story is centered on Antonia (Margherita Buy), 40ish, for 15 years happily married, living in comfort in the suburbs of Rome, and working as a medical technician, having given up dreams of medical school in favor of marriage. (Why the latter should be mutually exclusive choices is an issue not addressed by the film.) She has no children, in deference to her husband’s preference. Suddenly, her husband is hit by a car and killed and she enters a period of deep mourning; her mother.Veronica (Erica Blanc) is her main emotional support.

By chance, Antonia discovers that her husband had a lover. She wants to know more and her inquiries lead her, not to another woman, but to Michele (Stefano Accorsi), a gay man with whom her husband had a seven year affair. Michele lives with an extended family that includes Turks (Third World people in Italy), a transsexual, and another gay man gravely ill with AIDS. It’s a new world to the sheltered widow and she is accepted into the group with the openness that is evidenced by their diversity. As Antonia learns more about her husband’s secret life, she and Michele work through both their mutual loss and their initial hostility towards each other.

On the plus side of the film is an expert cast of attractive actors. Buy skillfully conveys a range of shaded emotions, both in her grief and in her responses to the surprises that come to light. Accorsi (The Son’s Room, The Last Kiss) is equally effective in showing anger and tenderness. Blanc practically steals the show as Veronica, her gravelly voice delivering some of the best lines–frank, outspoken, clear-eyed realism for her mourning daughter, offered wisely and lovingly.

But the script spreads itself too thin, leaving these actors, as well as the members of the commune, short of profound characterizations. Aside from the attribute of being sheltered, little is learned about what Antonia is like outside of her state of mourning. And surely the first thing a med tech would do on learning her husband was sexually active would be to get an HIV test. But that didn’t suit the stilted plotting here, so it doesn’t happen till late in the film, at which point another plot contrivance is introduced that further undermines the credibility of the whole.

Other moments don’t ring true, such as Michele’s assurances to Antonia that he was her husband’s first and only gay lover–as if that somehow would make the husband’s behavior more acceptable, or conversely, that it would be worse if there had been others. (And how can he be so sure? As she was so unsuspecting…) It’s an unlikely thought for a liberated gay man like Michele, especially in view of his own uninhibited sexuality during the film.

Ozpetek also fails to provide any guideposts for the timing of his scenes. With a few exceptions, they move among Antonia’s home, her visits to her husband’s grave, and Michele’s communal residence without any indication of how much time has elapsed. That makes it difficult to sense just how far these acquaintanceships have developed. So when there’s a climactic argument between Antonia and Michele, and she delivers a diatribe of rather commonplace homophobic accusations, it seems inconsistent with what has been represented as her acceptance of and by his multigendered family.

In direct contrast to Steam, which enticed the viewer into a wonderfully realized neighborhood of Istanbul, His Secret Life provides no tangible sense of atmosphere or place; it could be happening almost anywhere. There’s an opening sequence among the antiquities in the Art Center Acea, but the setting seems arbitrary and doesn’t assist in grounding the characters. Filmed in Ozpetek’s home district, Ostiense, it’s surprising that he’s failed to get the flavor of the area on screen; perhaps it’s a case of being too close to have perspective.