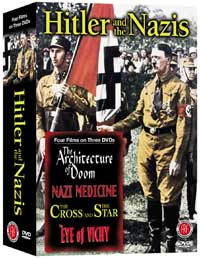 Fascism is seductive. There&#146;s a part of the human soul that longs to see a strongman take control, get everything back in line and rid society of those people &#150; you know the ones &#150; who are screwing everything up for the rest. That&#146;s what makes watching documentaries about Nazism so problematic. Reading the history of the Reich in dusty tomes simply doesn&#146;t punch the gut like film footage of the gleaming leather, the massive banners draping whole sides of buildings, the screaming, adoring crowds, and the man at the podium at the center of it all. This is why war was so necessary &#150; an alternative this seductive must be crushed.

The four films in this 3-DVD box document various aspects of Nazi culture. There is little military history here; these filmmakers are interested in the social aspects of Nazism. One film, The Architecture Of Doom, explores and explains the artistic and philosophical underpinnings of the movement. It shows Hitler&#146;s paintings, which are contrasted with the &#147;degenerate art&#148; the Nazis exhibited, then destroyed, at the beginning of their reign. Filmmaker Peter Cohen also explores the mysticism and twisted religiosity of Nazism. It&#146;s a fascinating documentary that delineates, without condemnation, the aesthetics of fascism.

Another film in the box, Nazi Medicine, is much more explicitly critical, and less successful. It links Nazi doctors&#146; experiments on Jews, the mentally handicapped, homosexuals and others with the wider eugenics movement, which was then popular in many countries, including the U.S. Unfortunately, the movie doesn&#146;t go into enough detail about exactly what the Nazis did to and with their subjects &#150; the name &#147;Josef Mengele&#148; never occurs at all. The director cuts immediately from pre-war eugenics rhetoric to the Nuremberg trials, without ever discussing what acts motivated the charges. This approach effectively renders some of the most shameful and horrifying episodes in modern history the stuff of an episode of Law and Order.

The Cross And The Star, on the same DVD as Nazi Medicine, discusses the connections between Catholic and Nazi anti-Semitism. It&#146;s nothing special, despite its intriguing subject matter. The Eye Of Vichy, though, is quite an impressive achievement. Directed by Claude Chabrol (Merci pour le Chocolat, Les Bonnes Femmes), it deals with life in occupied France by compiling actual newsreels from the time. Seeing the actual leaders, Marshal Petain in particular, is disturbing and fascinating. Chabrol not only displays the lies that were a part of daily life then, but also makes a powerful statement about the ability of the mass media to shape reality. Comparing this with the average Fox News Channel viewer&#146;s take on reality may seem facile, but is in fact all too easy.

Only Architecture Of Doom really exploits the seductive qualities of fascism described above. But all four of these movies are, at a minimum, worth seeing, and The Eye Of Vichy is remarkable. Watching it is like stepping through a portal into an alternate universe.