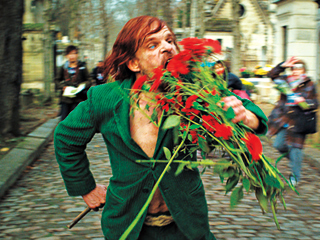 Like Terrence Malick and the late Stanley Kubrick, Leos Carax comes out with bold provocative movies on about the same schedule as Haley’s Comet makes visits, but like those giants of cinema, he’s well worth the wait. “Holy Motors” is only Carax’s fifth feature in 28 years and his first in 13. Unlike his other films from the exquisite “Mauvais Sang” to the spectacular film maudit “The Lovers on the Bridge” to the striking “Pola X,” “Holy Motors” is comparatively light and Carax’s first outright comedy feature.

Though shot on high definition video, “Holy Motors” serves as a tribute and memorial to film, which as a photochemical process is gradually going the way of the Dodo bird. The recent documentary, “Side by Side,” tells us that all the major film camera companies have shifted to digital and are no longer manufacturing analog cameras. A decade from now, the production of photochemical films will probably live on the same way that black and white films show up now and again for artistic purposes, but as a mainstream production process, its comparative inefficiencies doom the format.

“Holy Motors” opens with what appears to be Eadweard Muybridge footage of a naked man, a sort of Adam to signify the beginnings of film. Leos Carax himself awakens next to a movie theater, and now with director aroused, we jump to an affluent modernist house where Monsieur Oscar (Denis Lavant, the star of every Carax film) enters a stretch limousine driven by Céline (Edith Scob). The interior of the limo is basically a makeup and wardrobe room. Over the course of a day, Oscar makes numerous stops, each time adopting a different persona with a wildly different look from crippled vagabond to assassin to a dying old man. Each of Oscar’s outings represents a different movie genre, respective to the personas just mentioned: the social-consciousness film, the gangster movie, and the convoluted novelistic adaptation. A martial arts sequence has Oscar in a black costume with glowing sensors engaging in fight training before the film turns to erotica as a voluptuous woman in red appears and they entangle like mating octopi.

For the horror genre, Carax even returns to his part in the triptych “Tokyo!” and brings back the grotesque Merde, this time in Paris but still accompanied by Akira Ifukube’s Godzilla theme. Merde invades a photo shoot in Père Lachaise cemetery and kidnaps a model (Eva Mendes) who he then puts in a makeshift burqa. Annabelle Dexter-Jones has a funny cameo here and look for the product placement gravestones. Other highlights include an Entr’acte with the most dynamic accordions number you’ve ever seen in a movie, a scene of lost romance between Oscar and a woman named Eva Grace (Kylie Minogue) taking place in the wasteland that is the shuttered La Samaritaine, and the final scene in a parking garage (which I won’t spoil).

Not nearly as austere as his other films, Carax brings a fourth wall-breaking self -consciousness and playfulness to this exercise. There’s usually something incongruent in every scene whether that be the music, a bit of absurdist dialogue, or say, a big black dog on one’s death bed. Some parts are a bit forced or too artificial to draw you in or go on too long, but “Holy Motors” evokes incredulousness in a good way and how many films can you say that about? Luis Bunuel could be this film’s patron saint.