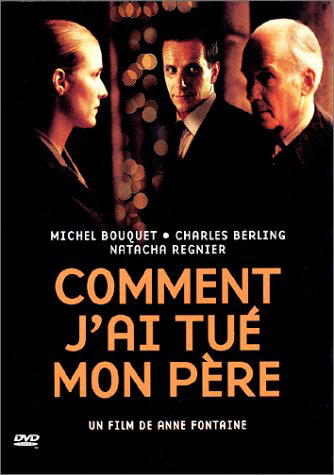 Father/son relationships provide a rich source of material for films. From Elia Kazan’s classic East of Eden to The Great Santini to a crucial subplot in American Beauty to the recent Road to Perdition, this seminal family dynamic is of universal interest. Few, though, have examined the subject with more subtlety and plumbed its complexities more profoundly than writer/director Anne Fontaine’s How I Killed My Father. Fontaine’s earlier Dry Cleaning was a little-seen and under-appreciated film, one whose promise has been breathtakingly fulfilled in How I Killed My Father.

Jean Luc (Charles Berling–also starred in Dry Cleaning) is a successful doctor with a gerontology practicefor a wealthy clientele in the town of Versailles. Married to elegant and beautiful Isa (Natacha Regnier), they are accepted in local society, living in haute bourgeois luxury. Isa yearns for motherhood, but they have no children–not because Jean Luc is opposed, she says, but because she would be unable to safely carry a child. Jean Luc’s brother, Patrick, has ambitions to be a standup comic and works as the family chauffeur.Jean Luc also has a mistress, a lab tech from the office; his wife adores him, is faithful, and chooses not to know about his outside dalliances.

Into this relatively stable family situation unexpectedly enters Maurice, Jean Luc and Patrick’s physician father who abandoned them years before for medical work in colonial Africa. Maurice (Michel Bouquet), like Jean Luc, demonstrates considerable charm; he seems always to know just the right thing to say. Jean Luc, highly controlling, is full of resentment of the old man and instantly feels in competition with him. "The rich need care," he protests, "They’re human, too." Maurice’s actions only fuel the tension. Since his father is broke, Jean Luc thinks initially that his own ample means can take care of his father’s finances and thus keep him at bay.

But Maurice is more complicated than that and he wends his way into Jean Luc’s life, cultivating Isa’s friendship and confidence, a further source of competition between father and son. "We don’t know how to talk to one another," one says, "We advance. We back away." Indeed, they dance an Oedipal sarabande together, the son resenting his father’s intrusions, judgements, and withholding of love while the father acts out the same kind of controlling behaviors at which he son is so adept. A former student of Maurice’s, a black African, now a doctor, visits him; Maurice shows him more warmth and affection than ever he has offered Jean Luc.

Fontaine uses a flashback structure, deliberately introducing ambiguity as to the provenance of these events–is this really happening or is it an imagined journey into Jean Luc’s unconscious? Whatever the answer to the former, the Freudian probing of the latter is the core of the film, clinically and coolly assessing filial emotion. With an accretion of small incidents and a great deal of dialogue, secrets are revealed, relationships are altered, and the situation grows ever more tense, enhanced expertly by a score (Jocelyn Pook, Eyes Wide Shut) of edgy, dissonant contemporary music.

A confrontation is inevitable. Yet Fontaine keeps not only the differences, but the similarities between father and son very much in the forefront. At one point Jean Luc drinks milk directly from a carton in the refrigerator. Several scenes later, the old man does the same: in small as well as in significant ways they are cut from the same proverbial cloth, these two. Can their profound connection/conflict be resolved? Fontaine paints her picture with a knowing brush; she will not deliver a facile solution.

Berling (Les Destinees, L’Ennui) is perhaps France’s outstanding screen actor these days. His portrait of Jean Luc, peeling away the layers of surface propriety and subtly exposing the raw nerves underneath, exactly complements the interpretation of the father by veteran Bouquet. Bouqet’s Maurice is quietly charming, courtly, clever, and confident, and he, too, allows underlying angst to show through only by shaded indirection. Fontaine masterfully creates a portrait of two strong men in conflict, inextricably entwined through family history, each seeing himself in the other, neither liking what he sees.