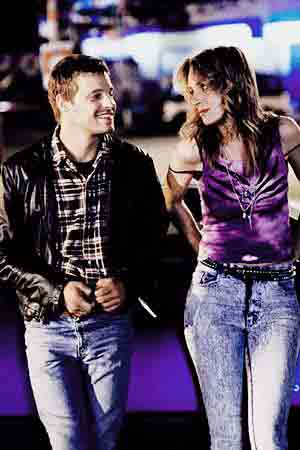 Hysterical Blindness, an emotional powerhouse of a movie from Mira Nair, ends up somewhat unpleasantly potent and forceful, akin to the state of mind after the fourth reading of an Ayn Rand novel. Hysterical blindness is a condition in which the afflicted person is temporarily blinded because of stress or neurosis. It happens to Debby (Uma Thurman, Pulp Fiction, Tape), a strikingly beautiful single woman in Bayonne, New Jersey, just past her salad days. While hysterical blindness afflicts her just twice in the movie, she is, at all times, metaphorically blind to her own need to be loved.

In the backwaters of 1980s New Jersey, Debby frequents seedy bars in spandex jeans, along with her best friend, Beth (Juliette Lewis, Natural Born Killers, The Way of the Gun). Beth is a single mom, but when Debby comes to pick up her up, the mother-daughter roles are reversed. While her ten year daughter, Amber (Jolie Peters), calmly waits by the gate to say goodbye, her tittering mother excitedly bounces around in her mini-skirt, oblivious to everything but the immediate joy of man-hunting. This reversal is emblematic of the romantic narrative of the film, where the women usurp the courting ritual usually dominated by men in Hollywood movies.

Both Debby and Beth are attractive, if slightly over the butt-pants age, but they constantly demean themselves in their efforts to find meaningful relationships–or at least to find someone who will turn up for dinner when invited. The bar where they scout for love seems to be the unlikeliest place to find men who care. Most of the men are occupied at the pool table and their romantic desires seem to have been washed out in the harsh white glare of the overhead lights. Those who do care, like Rick (Justin Chambers), are interested mostly in one-night stands. Debby develops an obsession for Rick, and Rick humors her interest as long as it suits him.

The bar is the pivot point of the movie, where, in the swirling garish lights of disco and pool, the girls plot their strategies of enticement. The cheery 1980’s music is a constant accompaniment. The soundtrack, consisting of songs such as Cyndi Lauper&#146;s "Girls Just Wanna Have Fun," is a reminder of Mira Nair&#146;s Indian cinema lineage, where songs often cue the emotional tempo of the film. When Debby and Beth dance to the jukebox tunes, their loneliness and neediness is no longer verbalized but hangs like a cloudy haze over their heads.

Of the two, Debby is the less stable and more desperate to have a boyfriend. She succeeds in convincing Rick to sleep with her, but he is interested in the pool table and Beth, in that order. Debby lives with Virginia, her mother (Gena Rowlands, A Woman Under the Influence), who is a waitress in a local diner. Ironically, Debby is clear-eyed when discussing her mother&#146;s growing interest in her boyfriend Nick, telling her to &#147;be careful.&#148; The man in question is a retired auto-parts salesman played with dignity and aplomb by Ben Gazzara (The Thomas Crown Affair, Summer of Sam). Nair portrays the elderly lovers with tenderness, with Rowlands in particular balancing her role of a caring mother with the early joys of falling in love again. Virginia is witness to her daughter&#146;s private hell, replete with uncaring boyfriends, while her own life is finally showing some promise of love and fulfillment.

In portraying Nick&#146;s courtship of Virginia, Mira Nair introduces a pair of unlikely lovers as she did inMonsoon Wedding where the wedding planner and the maid were ordinary people relishing some extraordinary moments, albeit tentatively. Part of the magic in both of these movie courtships is watching two people clumsily trying to express their emotions for each other, touching in their mutual regard. When Nick asks Virginia if he can call her &#147;Jen,&#148; she smiles uncertainly, not relishing the nickname but not wanting to discourage him, either.

In Monsoon Wedding, Nair rendered the rush, excitement, humor, poignancy and paternalistic exploitation in Indian wedding rituals. In contrast, in Hysterical Blindness, she captures the loneliness of working class single women and their desperate need to find men who will reciprocate their love. But ultimately, Nair, who reveled in the exuberance of Indian festivities, is unable to overcome the bleakness of New Jersey blight. Hysterical Blindness is a victim of its own theme. While following the women through their personal tragedies, the narration focuses incessantly and single-mindedly on their mutual squabbles, their fears of rejection, and their self-obsessions. The men, while not stereotyped, are not given the emotional depth accorded to the female leads. Nick is decent and thoughtful, but does not get enough screen time. Rick is withdrawn and sulky, and the film leaves him to himself, without further exploring his casual cruelty towards women. In a movie where the men are the source of all of the tribulations for the women, this is a major drawback. The emotional overload of female angst irreparably drags the film down.

(11185)
$8.99 (as of January 25, 2021 - More infoProduct prices and availability are accurate as of the date/time indicated and are subject to change. Any price and availability information displayed on [relevant Amazon Site(s), as applicable] at the time of purchase will apply to the purchase of this product.)

(18094)
$6.99 (as of January 25, 2021 - More infoProduct prices and availability are accurate as of the date/time indicated and are subject to change. Any price and availability information displayed on [relevant Amazon Site(s), as applicable] at the time of purchase will apply to the purchase of this product.)
related posts