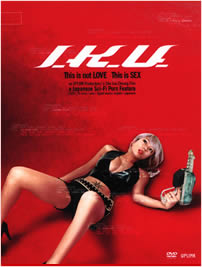 IKU is pornography for sci-fi and computer nerds. It opens with an expository text-crawl parodying Blade Runner, describing a future society in which renegade pleasure robots mingle with humans, extracting information through sexual contact. Even this minimal plot, though, seems too much for the filmmakers to sustain. It&#146;s never referenced again.

The film contains five sex scenes. Each features a different girl, but digital effects and on-screen text indicate that she is actually the same girl, the sex robot Reiko, taking different forms. There&#146;s a lot of digital tweaking done to the footage in IKU. Since it&#146;s a Japanese movie (almost the entire cast is Asian&#151;only three non-Asians appear, and only one merits a sex scene), Japanese porn guidelines are in place, which means that any and all penetration must be hidden. In this case, it&#146;s sometimes done with a sort of mosaic-tile overlay, which is mercifully brief, and other times with a strategically placed bright light reminiscent of the gleam seen in toothpaste commercials.

During the few minutes at the beginning and end of each scene, it&#146;s possible to focus on the world IKU&#146;s creators have envisioned. It&#146;s not a bad one, actually. It&#146;s not as deliberately grimy and rain-streaked as Blade Runner&#146;s Los Angeles, and at times looks remarkably like a mix of Wong Kar-Wai&#146;s Chungking Express and the Tokyo described in William Gibson&#146;s novel Neuromancer. Most of the time though, a mixture of budgetary constraints and excessively hyperactive quick-cutting, not to mention the overuse of fisheye lenses and surveillance angles, make it look like an X-rated episode of Max Headroom.