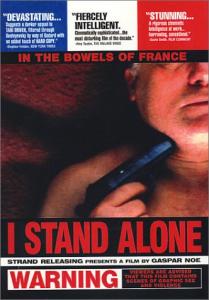 . I Stand Alone (the French title: Seul Contre Tous, literally, Alone Against All) is not for the faint of heart – and, perhaps, not for the obvious reasons. It contains graphic, disturbing physical violence. It contains a few minutes of clips from a hard core pornographic film. Most sophisticated filmgoers have coped with both before. The real violence here, the far more deeply disturbing violence, is the violence inside the mind of the protagonist.

Philippe Nahon (A Self-Made Hero, La Haine) is completely convincing playing an unemployed butcher whose life has been episode after episode of abandonment, betrayal, failure, and disappointment. The resulting anger, frustration, and utter desperation inside of his heart and soul gets twisted into a misogynistic, racist, homophobic rage which he carries with him like a psychic wound that refuses to heal.

In an extended, rapidly spoken opening voiceover he tells his story, the personal history which has brought him to his current desperate state of affairs. A small chance at a new life inevitably fails, and, as hope fades, his life does the seemingly impossible and unravels still further. We are bottom scraping here.

Writer/director Gaspar Noe’s initial outing on screen will probably be talked about more than seen. This exposition of unromanticized, crushingly brutal reality is not fare that many filmgoers will be willing to brave. (It is also the sort of film which will undoubtedly and unfortunately be condemned, for all the wrong reasons, by a whole lot of people who won’t even have seen it.)

Nonetheless, Noe has accomplished exactly what he seems to have set out to do – to shock with a graphic filmic representation of the why behind behavior that is reported in the news all the time: seemingly arbitrary conflict, violence, hatred. The butcher never for a moment becomes a sympathetic character and Noe doesn’t for a moment try to justify or excuse his behavior. He succeeds brilliantly, however, in making us understand, intellectually and emotionally, the causes and effects he explores, the why of this man’s twisted destiny.

Noe uses several interesting techniques both to intensify the feeling and focus the thinking in his film. Instead of gentle segues from one scene or episode to another, he repeatedly uses a swish pan and/or a skip frame accompanied by a sharp (electronic?) sound, something like a heavy metal door slamming shut. He uses text flashed on the screen as an incremental bit of verbal information that our butcher may or may not himself be able to articulate. MORALITY belongs to the rich… JUSTICE is epitomized by his gun. The gun and sex are the only means remaining for this battered character to sustain any ego at all.

"Living is a selfish act; surviving is a genetic law," Noe tells us."My entire life is a mistake," says the butcher, and he has nothing left to lose. In the final sequence, he takes his institutionalized daughter out, ostensibly on an excursion to the Eiffel Tower. What finally happens, both in his mind, and in reality, seems, paradoxically, both to affirm and to deny whatever vestige of humanity has been left in the man.