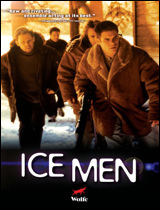 QAF was mostly about guy hunting, but Ice Men, adapted from a story by Best (screenplay by Michael Lewis McLennan) brings together a group of lifelong guy pals for a big game hunting trip in the wilds of Canada.The isolation in a cabin in the woods with five guys is a contrived set-up to unearth some home truths these 30-something characters are facing in the middle of their unexamined lives.

Vaughan (Martin Cummings), recently broken up from his girlfriend and bitter over unresolved feelings for his recently deceased father, has maintained the family cabin in the woods and is having his first hunting party to celebrate Bryan&#146;s thirtieth birthday. He might show vulnerability in private moments recalling his conflicted feelings with dad, but mostly he&#146;s the rigid, successful brother who has to prove himself at all times. He’s the easygoing successful nice guy to his friends, but unashamedly unforgiving to his brother Trevor (Ian Tracey). He tells his buddies &#147;You can&#146;t buy a place like this; you have to earn it, you have to grow up in it.&#148;

Trevor, played with understated intensity by Tracey, is a self-effacing low-heeled high roller; he shows up not to gate crash the party, but to commune with nature, make promises to himself and hit his brother up for a life-saving loan.

After a poker game, the guys thaw out in the Jacuzzi comparing life notes, farting and taking cheap shots at each other.&#147;This is great, we&#146;re all arguing and whining again,&#148; Bryan says on an obviously needed break from his marriage. A drooling drunk Bryan (David Hewlett) tells Trevor that he&#146;s done bad things. "I don&#146;t want your secrets,&#148; Trevor replies.

Fortunately, there is a dramatically richer (and quieter) dimension that Tracey taps. Instead of hunting, Trevor goes ice fishing and then livens up the guys with a pick-up ice hockey game.&#147;That&#146;s the difference between Vaughan and me I guess, I just stopped trying.&#148;

The straight buff-boy trainer Steve (James Thomas) has recreational sex with men, leading to the obligatorily gay seduction. He submits willingly to bunkmate Jon&#146;s advances but tells him the next day during the hunting trip that he&#146;s not gay. &#147;Nothing happened, we were drunk,&#148; he says, shutting down any further discussion.

With strong ensemble acting and dimensional characters, Ice Men engages, but ultimatelyis too sketchy for a meaty character study and the dialogue too hedging for any O&#146;Neilean verity.Editor Mike Munn nicely punctuates cinematographer Gavin Smith’s well composed exteriors with panoramic snowscapes and sharply contrasting earthy tones.They catch some visual poetry even if the screenplay doesn&#146;t reflect this richness in theclaustrophobic uninspired interior scenes.