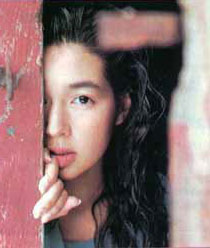 Ichigensan is writer/director Isao Morimoto’s first feature film and it is a triumph. From his camera panning slowly across the Ryooanji Monastery in Kyoto, to the stunning way he makes us pause as sightless Kyoko seduces Swiss literature student Boku, Morimoto develops a sensual mood and a languorous time frame in which to enjoy it.

Kyoko (Honami Suzuki, one of Japan’s most popular young actresses) has been blind since she was very young. She requests that Kyoto University send someone to read to her. Boku (Edward Atterton) is only too happy to reply in the affirmative, as he is fluent in Japanese, loves literature and is instantly attracted to Kyoko. From their first meeting, Morimoto’s direction always allows us to focus on Atterton’s face as he observes Kyoko. We feel, as he does, the strange excitement of staring at a beautiful woman who is not aware she is being so closely observed. But Kyoko sees things in her way. She tells Boku of the many things she observes, such as the way she feels the wind currents shift when someone enters the room, or the way the leaves rustle just before it rains. Slowly Boku is captivated by her gentle charms and they fall in love.

Director Morimoto’s background is as a painter, and it shows. His use of Japanese colors is very effective. In one scene the two lovers are doing calligraphy, his arms around her back as he guides her fingers through the strokes on each character. She spills a drop of red ink and Morimoto has it take up the entire screen as a portent of what is to come. In another scene they are kissing good-bye for the last time as their hands and arms become blanketed in falling cherry blossoms – not the more usual translucent sakura, but dark, shadowed blossoms, again symbolic of their doomed romance.

With such enthralling lead characters, the question arises: why does it end the way it does? Why does Boku have to do what he does? Morimoto leaves us wondering about their futures. For those intrigued with an exotic, sensual Japanese world, Ichigensan is an uplifting and renewing experience.