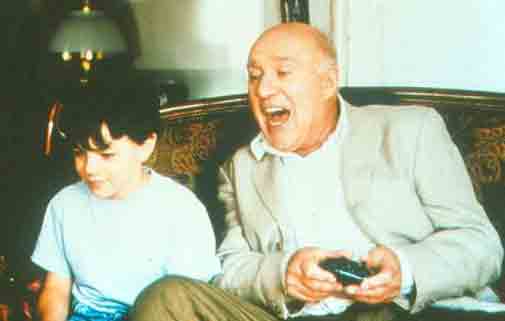 King Berenger the First, the eponymous character in Ionesco’s play, Exit the King, is an old man facing the loss of powers that accompanies aging as well as the inevitability of death. Berenger is the name Ionesco gave, in other plays, to his Everyman character; this Berenger is a King, but he is all of humankind, universally wrestling with the acceptance of mortality. "Why was I born, if not to live forever?" Berenger asks.

I’m Going Home, a film by 93 year old Portuguese director Manoel de Oliveira,begins with a long scene from Exit the King being performed in a theater. Berenger is played by Gilbert Valence (Michel Piccoli), a famous and accomplished actor, who is at once Berenger, Everyman, Valence himself and an alter ego for Oliveira. When Valence comes backstage after his curtain calls, he is informed that his wife, daughter and son-in-law all have been killed in an automobile accident. Mortality could not be writ more brutally. The irony is that it is not Valence’s own mortality that triggers the confrontation with loss.

What is often remarkable about Oliveira is what he chooses not to depict on screen. There are no tears here, no funeral, no dramatic displays of mourning. Oliveira trusts the intelligence of his audience; the inexpressible horror of Valence’s loss need not be spelled out. (Contrast the sentimental and far less effective depiction of loss in The Son’s Room.)

Instead, Oliveira picks up his story later on, as Valence goes about his life in Paris–having a coffee at his favorite cafe, window shopping, buying a pair of shoes, playing with his grandson. The purchase of new shoes and the pleasure they afford him seems a commonplace delight, but Oliveira is carefully laying the groundwork for a telling metaphor. Talking with his agent at one point he says, "I’m constantly in someone else’s shoes." And, later, his shoes are stolen by a mugger who leaves Valence to walk home in his stocking feet.

He acts again, this time as Prospero in The Tempest, Shakespeare’s last play and, particularly compared to the Ionesco, an upbeat one; Prospero alludes to the passing nature of life, but he also has the wisdom of age and is the instrument of reconciliation and forgiveness. But Valence is still mired deeply in mourning which Oliveira shows by indirection. He goes about his routines (habit as an emotional crutch), he does his work (work as a substitute for life, acting as living another’s life). When his agent, George (Antoine Chappey), confronts him about his withdrawal, he replies, "I live as I can." George tries to convince him to take a television role, but Valence refuses to compromise his artistic standards for money and exposure.

But is it really only a matter of principle or is Valence anticipating difficulty with new challenges? He accepts an English-speaking role in a film of Joyce’s Ulysses, but has difficulty learning the lines. And the character of Malone is a much younger man; there’s a long scene of Valence being made up and bewigged. During repeated takes of a scene, he cannot get it right. Finally, he capitulates: "I’m going home," he says and walks off the set in costume, muttering his lines as he walks through the Paris streets. Valence is losing his powers, even as did Berenger, even as must we all. His grandson quietly observes Valence’s strange arrival home–in costume, distracted. Oliveira closes with the thoughtful look on the face of the boy, the young who will inherit the power, the responsibilities, and, in turn, lose it all again.

With the hurdy-gurdy sounds of "Under Paris Skies" and his frequent and long-held takes of Paris by day and night, Oliveira (who lived in Paris for a time) gives witness to this most beautiful and civilized of cities. But his strong sense of place is not mere sightseeing–in the life of the city he suggests the ongoing life of humanity, the context in which individual mortality must be contemplated.

Michel Piccoli (Contempt, Diary of a Chambermaid, Atlantic City), veteran of both the stage and half a century of films, thoroughly inhabits the role of Valence. He makes remarkably invisible shifts of stylistic gears between his stage portrayals as Berenger and Prospero and his "real life" portrayal of the working actor. Without flamboyance, without artifice, and with utmost subtlety, he conveys the internalized grief, the slowly eroding confidence, and the struggle to maintain dignity in the face of the inexorable cycle of life.