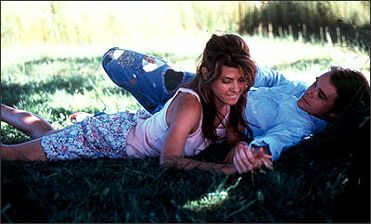 In the Bedroom, a fine debut film by director Todd Field, visits the emotional territory of films like Affliction and The Sweet Hereafter: small-town families (New England, Canada) caught up in the stressful complications that life delivers; people coping with pain and loss, making decisions and taking actions with knotty moral implications.

Based on a short story by Andre Dubus, the setup is straightforward. In a small fishing village in Maine a young couple are in love. She, Natalie Strout (Marisa Tomei), is the mother of two young kids and is separated from her husband Richard (William Mapother). He, Frank Fowler (Nick Stahl), is younger than she, on summer vacation, expecting to go off to university in the fall, but thinking he might wait a year and work his lobster boat. His father, Matt (Tom Wilkinson) is a doctor. His mother, Ruth (Sissy Spacek) is a high school teacher with a doctorate in music. She leads the school’s girls’ chorus, in rehearsal for a concert that includes some beautiful Macedonian and Croatian music–an allusion to current events, perhaps,a background suggestion of the kind of moral complexities this story will raise.

Ruth is concerned about Frank and Natalie’s relationship, but Frank assures her, "We’re not serious. It’s a summer thing." Richard is arrogant, presumptuous, intimidating and jealous of Frank’s relationship with his estranged wife; his first expression of violence leaves Frank with a stitched up eye. The events that follow slowly unwind with a sense of inevitability–but not predictability. Field takes his time (an 18 page short story becomes a better than two hour movie), lets his camera linger on the faces of his characters, charting their emotional responses, their interactions, their conversations–both what is said and what is not.

Field also fills in the real world that these character inhabit and he takes the time to show some of what makes up the texture of their lives. Opening shots in a sardine cannery (not unlike the opening of John Sayles’ Limbo) and scenes of lobster fishing provide a sense of place, along with barbecues, little league baseball, the local beanery, and a poker game that includes a Longfellow spouting player. These are not digressions, but are seamlessly integrated into the progress of the story and the accumulation of small events that establish character, relationships, and motivation. (No more of the plot will be disclosed here.)

The individual performances and the ensemble together are faultless, but the fullest development is afforded to Ruth and Matt. Spacek (The Straight Story, Affliction)seems to find new depths here as a loving mother outspoken in her judgement and criticism of her son’s relationship, later going into reverse and internalizing profound emotion with which she cannot find peace. Wilkinson (Oscar and Lucinda, Shakespeare in Love) as Matt is more accepting, less judgmental; he subtly conveys the difficulties of navigating through the shifting, changing feelings in Matt’s marriage as they are subjected to the fateful twists of events.

The key to Field’s accomplishment here (with his co-screenwriter Rob Festinger–also a debut) is that all the events that unfold develop out of fully realized characterizations. The moral questions raised by the story are worthy of debate, but, at the same time, the multi-leveled motivations are so convincingly established that the outcome follows ineluctably.