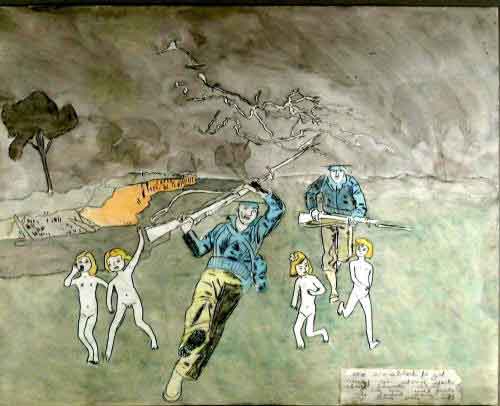 MovieGoods.com has a selection of photographs of Darger works

The discovery, upon his death in 1973, of Henry Darger&#146;s massive chronicle of the Vivian Girls with accompanying illustrations, provided the world with its most comprehensive example of "outsider art" to date. A contentious issue even by insular art-world standards, outsider art refers, generally, to a genre of art made by untrained artists who do not recognize themselves as artists. With respect to Henry Darger, the question remains to what extent he was an outsider, since his reclusive, near-invisible life reads, thirty years on, more as "insider" art than anything else.

The details of Darger&#146;s life are scant and tragic. Born in the late 19th century, Henry Darger lived alone with his father after his mother died giving birth to a second child, who also died. When his father took ill and passed away, young Henry was sent to an Illinois state asylum for feeble-minded children. He escaped in his late teens, making his way to Chicago, where he found work as a janitor.

In terms of biography, that&#146;s about it. He lived in a cramped one-room apartment on Chicago&#146;s north side until his death in the seventies. But upon clearing out his room, his landlord uncovered a musty trove of legal-pad scribblings, pictures pasted inside old phone books, and reams of glued-together butcher paper featuring delicately wrought watercolor paintings–elements that made up a startlingly realized fantasy world.

Fully titled The Story of the Vivian Girls, in what is Known as the Realms of the Unreal, of the Glandeco-Angelinian War Storm, Caused by the Child Slave Rebellion, Darger&#146;s 15,000 page epic was never intended to be seen by anyone but himself. (Informed, on his deathbed, of the intensity of his images, Darger reportedly replied, "Too late now.") It is a vast, vivid narrative based in some otherworldly land where evil war generals hold cherubic young girls captive. Their great attempt to overthrow the predatory adults, in a series of often violent and horrific battles, make up the bulk of the story. Darger also left behind long stretches of beautifully finished paintings, several of which depict in graphic detail the brutal torture of the Vivian girls by their enemies.

It is these paintings, along with a series of angelic pre-pubescent blond girls with penises, that have drawn questions from the art world. Might Darger, an eccentric recluse with an oversized collection of turn-of-the-century clippings of young girls in short skirts, have led a more sinister life? In today&#146;s culture, where grisly murderers are invariably described as quiet, respectful good neighbors, it&#146;s understandable that the question is raised. And while Darger&#146;s former neighbors testify to his undeniable strangeness&#151;it appears that he acted out the parts of his characters as he wrote, in voices loud enough to be heard throughout the apartment building&#151;the documentary at least acknowledges that it&#146;s likely too late to know for sure.

Of course, the best proof the world has that Darger lived a simple life is his art itself; how could anyone manage to be a vicious psychopath and still produce the sheer volume of artwork this man did? Director Jessica Yu makes the case that it&#146;s tough to know much about Darger with certainty. She plays three-card Monte with talking heads, as one states unequivocally that Darger, a lifelong church-going Catholic, would sit up front at Mass each day. Another claims he was known to sit in the very last pew. Still another notes that his usual position was smack dab in the middle of the congregation. One&#146;s lasting impression of the man is melancholic; it may serve a romantic fantasy that he was able to find solace in his art, but it&#146;s no less heartbreaking. (This is especially true considering that Darger, not anyone&#146;s picture of an ideal parent, petitioned his local parish for decades to let him adopt a daughter.) The facts of his life are few&#151;a childhood marked by tragedy, an adult life restricted by poverty&#151;but the peculiar power of his art is lasting. In some small way, the world is better for it.