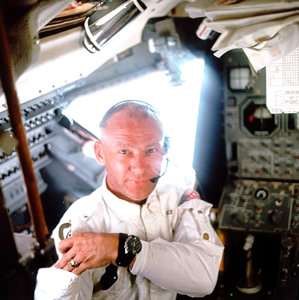 On Mel Brooks’ original album of The 2000 Year Old Man, he does a bit where he’s an astronaut being interviewed by Carl Reiner. The gag is that he’s more ape than human, and when asked about the seven astronauts who appeared in Life magazine, he replies, "None of them are them. They’re models, man, so that we’re not ashamed for Russia to show such ugly little astronauts." And while Mel Brooks may not have actually been an astronaut, he seemed to be on to something. If the astronauts we saw weren’t exactly models, they did seem plastic, sort of Gary Cooper clones- laconic, brave, tough, taciturn, decent, kind, patriotic, white, American men. And while a great fan of Gary Cooper, I always thought the astronauts themselves seemed two dimensional and the least interesting aspect of space exploration. But David Sington’s new documentary gives us a surprising and surprisingly moving vision of ten of these guys.

When President Kennedy called on us, in 1961, to put a man on the moon by the end of the decade- it seemed a task designed to bring out the best in America. We would focus our immense wealth, impressive scientific knowledge, American determination and will to succeed, and the "right stuff" of our astronauts to beat the Russians there, cross yet another frontier, develop important new technology, and celebrate the human instinct to explore and learn. Outside of a noble war, it’s hard to think of another venture that called on and celebrated so many quintessentially American virtues that also had a universal appeal. Given the divisions within America in the late 1960’s, this romantic quest to explore the heavens seemed to unite just about everyone. And when Apollo 11 landed on the moon on July 20, 1969, it was the most watched event in the history of the planet.

In the three years after that first "small step for man and giant leap for mankind" another eleven men walked on the moon. Since then, no one has. And with some of those Apollo program astronauts already dead and the rest in their seventies, it was an inspired idea to interview and record the history of those who either walked the walk or piloted the ships that brought them there. Sington’s film will be justly criticized for having too much of talking heads and too many close-ups, and celebrated for its remarkable footage of the astronauts in action. But the great coup was Sington’s ability to get these guys to open up about their deepest feelings and emotions .

Any discussion of the Apollo astronauts has to start with Neil Armstrong, who took that first small step on to the moon. Armstrong refused to be interviewed for the film and has been a virtual recluse for decades, but his absence proves to be a blessing in disguise. For one thing, we get a strong sense of him through the eyes of his colleagues. And without question, Armstrong was the stud, the Gary Cooper, the Sam Shepherd character in The Right Stuff, the iconic American that so many women adored and so many men admired. He was laconic and taciturn, brave and modest, skilled and charismatic. And with his absent monopoly of that particular type of astronaut, the others seem freer to define and convey their own idiosyncratic selves.

Some of these guys seem more science nerd than space jockey. Apparently Buzz Aldrin (the second man to set foot on the moon) could anaesthetize anyone with his monologues about the mathematics behind a rendez-vous in space. Others are most excited by the technology they needed to create and modify. But while somewhat geeky, their courage is never far from the surface. While all of them would deny being brave, they don’t deny their awareness of the dangers involved- after all, three of their colleagues were burned alive during a disastrous test of the first Apollo spacecraft. But they deal with those concerns in different ways. Alan Bean notes the thin bit of glass that kept him from being instantaneously destroyed in space. Michael Collins chooses to focus on the tasks at hand. As he puts it, the experience was less about "fearing" death and more about "worrying" over what needed to be done.

But if they have different scientific interests and different ways of coping with the precariousness of their survival, they share a deeply spiritual response to the experience. For one of them, it brought him closer to Jesus Christ. For another, the experience dwarfed all "man-made religions" and brought him closer to another form of spirituality. For some the emotions emanated from tiny moments- like being able to hold your thumb up at arm’s length and blot out the entire earth- something none of us will ever be able to do. For others, it’s the experience of being on the moon with one buddy- the two of you being the only life there- and experiencing it not as lonely, but as comforting.

We don’t get to know these men by hearing about their childhoods, marriages and family, careers before or after NASA. We get to know them as they struggle to re-discover and share feelings that are almost four decades old and not easily conjured. One of them went to a hypnotist to get help with remembering what he felt in space and on the moon. Two anecdotes especially stayed with me. We know that the first astronauts planted the American flag there. But at least as important to them was leaving behind little, personal mementos- a locket or a Polaroid photo of their kids. They wanted to humanize that arid rock and leave behind something that was personal and emotionally salient to them. The other was a story told by Michael Collins who was on that first flight that landed on the moon. After returning home, he and his two colleagues went on a world tour. He was constantly surprised at how people of every nationality, race, and class would not say congratulations on what "you" did or what the "U.S." did, but congratulations on what "we" did. These astronauts weren’t mostly Gary Coopers, but complex, capable, brave, and interesting guys who did something in which the human family took pride. In the Shadow of the Moon is a fascinating glimpse into men who had that rare opportunity. And it’s nice to be reminded that occasionally the U.S. actually exhibits the right stuff.