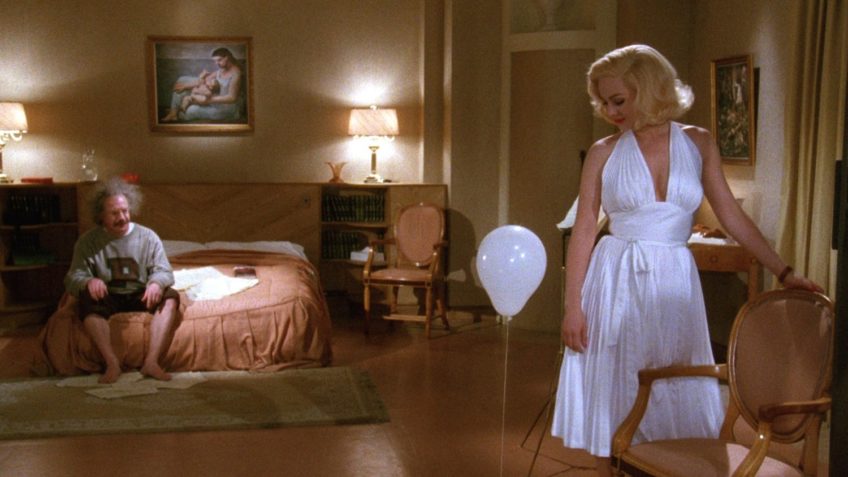 Sometimes it is a tough thing to decide, how to lead off a review of a work of art that simply is not good. In the case of the latest Blu-Ray release from The Criterion Collection, British filmmaker Nicolas Roeg’s 1985 adaptation of Terry Johnson’s play, “Insignificance,” this becomes something acute. I could start off with the obvious pun that the title recapitulates the arts merit. I could go on about how stage plays, even successful ones (artistically, not commercially) rarely guarantee cinematic success. Or, I could just say that the screenplay, acting, characterization, dialogue, editing, cinematography, and assorted other technical aspects, simply are not good, thus the whole film tanks. Let me compromise, and admit that all three of my potential essay openings would work because all three are equally so.

Now, I have not read nor seen the original stage play, and actually had never heard of the play before. But, the premise of the film seemed interesting, as culled from Criterion’s own website, describing the 108 minute long film, set in 1954:

Four unnamed people who look and sound a lot like Albert Einstein, Marilyn Monroe, Joe DiMaggio, and Joseph McCarthy converge in one New York City hotel room in this compelling, visually inventive adaptation of Terry Johnson’s play, from director Nicolas Roeg. With a combination of whimsy and dread, Roeg creates a fun-house-mirror image of fifties America in order to reflect on the nature of celebrity and lingering cold-war nuclear nightmares. Insignificance is a delirious, intelligent drama, featuring magnetic performances by Michael Emil as the Professor, Theresa Russell as the Actress, Gary Busey as the Ballplayer, and Tony Curtis as the Senator.

What else is there to say? Surprisingly little, because all four of the main characters descend rather quickly into caricature. Curtis’s character is the worst portrayed and written. The nadir for his character comes in a scene where his character is 69ing with a prostitute dressed up in a blond wig to look like Monroe. Now, aside from the Left Wing cheering at such a predictable scene of hypocrisy, it adds ZERO to the narrative, the prostitute is not exactly attractive, and the sight of her going down into Curtis’s aged crotch simply makes one shake one’s head and say what the hell? Later, we see, in a flashback, that McCarthy was apparently sexually abused by priests, and this is when an intelligent viewer knows that they are not watching a comedy (where are the laughs?), as much of the criterati describe the film, but simply an unfunny didactic melodrama, and one with more cringe-worthy moments than I care to recount.

A similar feeling ensues when the Monroe character almost succeeds in seducing the Einstein character. But, it’s utter absurdity, as she displays a supposed knowledge of the theory of relativity, and is about to undress and take the Professor to bed. Now, don’t get me wrong; Russell (then married to Roeg- over thirty years her senior) looks gorgeous, never better in any film that I’ve seen her in- and far more sexy than the real Monroe, but her imitation of the real sex symbol is pathetic. The same can be said of the one dimensional portrayal of Einstein by the still little known Emil. Then, predictably, just as the Actress and Professor are about to consummate their meeting, in storms the DiMaggio figure- who looks and acts nothing like the real thing. Busey overplays him like a farm hick white boy while DiMaggio was the son of Italian immigrants in San Francisco. Through the course of one night, these four characters act and interact. Einstein stymies McCarthy and Monroe; Monroe stymies McCarthy and DiMaggio; DiMaggio stymies Einstein and McCarthy; and McCarthy stymies Monroe and Einstein, who also spends most of the film is turgid and predictable guilt flashbacks to images of the atomic bomb, Hiroshima and Nagasaki, and the Nazis. Monroe has visions of a miscarriage she later has when punched by McCarthy. DiMaggio recalls his father’s pushing him into sports, and obsesses over baseball cards, while McCarthy just plays the film’s resident asshole.

All of this is so damnably predictable, and makes one wonder if the actual stage play was any better, for sometimes ideas that thrive in the micro of a stage drama are drowned in the macro of a film. The answer is likely, if slightly, if only for the lack of the ham-handed symbolism, terribly edited sequences that SCREAM their political slogans at the viewer, flashbacks that are embarrassingly puerile, and often anomic edits and framing. As for a coherent message in the film? Fame in the 50s sucked? Whoa, deep man! Then, to top things off, the film delves into Political Correctness of the worst sort, by tossing in Will Sampson, who played the Indian Chief who kills Jack Nicholson’s character in One Flew Over The Cuckoo’s Nest, as a Cherokee elevator operator in the hotel where most of the action takes place. This allows him to decry what the white world hath wrought and oddly bond with Einstein, presumably because Einstein’s guilt over nuclear power haunts him. Now, let me wait till your rolled eyes return to their proper place in your sockets.

As for the Blu-Ray? The film print looks beautiful, insofar as the transfer is pristine, but the technical aspects of the film are all horrendous. Roeg seemingly slept through directing many of the scenes, because the actors seem to wander all over the place. Terry Johnson, who adapted his own play, laces the film with phony dialogue that sets the characters up to pose, not enact real world characterizations. Plus, there simply is no story to be told. The tale is the premise, and the film enumerates only a few predictable variations of that premise. The resulting feeling that a viewer gets is that it’s like actually getting to bed down with a sex symbol like Monroe only to have her want to do mere missionary sex with a condom and spermicide whilst you’ve brought batteries, dildos, nipple pinchers, and an array or warming body oils and lubricants. The musical score is wildly over the top and then oddly absent at key moments. Stanley Myers and Hans Zimmer, two veteran film scorers, likely cannot be fully blamed, as I sense Roeg’s hamhandedness even in this area. Peter Hannan’s cinematography and Tony Lawson’s editing are simply not good, yet, again, I get the sense that they merely did what they were told to by Roeg, who seemingly fancies himself something of a visionary, yet one who lacks anything akin to real vision, much less an ability to even iterate such a vision. Lawson basically admits Roeg’s overweening tendencies in a 15 minute long interview extra for the disk. Also given as features are interviews with director Roeg and producer Jeremy Thomas, who, unlike Lawson, in his interview, say little of value in their shared 13 minute interview. A 14 minute long Making Of documentary, from the time of the film, contributes little, and the trailer included is so brief that if one sneezes one will miss it. There is no audio film commentary included, and, once again, I lament this irony, because 1) this is exactly the kind of film that REALLY needs a commentary- not that it would make a bad film good, but it would help, at least, explain why such a film even gets greenlighted, and 2) just as the Blu-Ray technology finally allowed a single disk to hold ‘hours and hours’ of bonus features, streaming technology has obviated the very market for such ‘extras.’ Yes, the Golden Age of the DVD, the first decade of this millennium, is officially over.

“Insignificance” is a bad film. In watching it, and blinded by the pristine nature of the transfer and Blu-Ray technology, I was initially willing to give it some slack for, at least, attempting something of depth. But, with a night’s sleep, its attempt is so banal, so off the mark, so condescending and poorly wrought, that to do anything but warn potential viewers to avoid this film would be neglecting the primary function of a critic; to enhance the arts by weeding out the bad and supporting the good. As a consolation, I will recommend two films, from the same time period, that do significantly better and more than Roeg’s film. The first is Woody Allen’s 1987 film “September,” also a chamber drama exploring fame, evil, and the consequences of both, wherein a group of people basically live out the aftermath of the infamous Lana Turner-Johnny Stompanato murder. The second film is Martin Scorsese’s underrated comedic gem, “After Hours,” which truly is funny, and deals with the inability of people to communicate in a world obsessed with trivia. Watching these two films will show how lame and pretentious a trifle “Insignificance” is. While “September” is not a great film, it has some very good moments, and “After Hours” has similar feel to “Insignificance,” but is much better written, acted, and executed, funnier, and even deeper. Fortunately, many of Criterion’s titles are on streaming venues, so ride the new technological wave, and, if you just feel a need to watch this film, watch it that way. The money saved on the disk you can gladly split with the critic who saved your wallet unneeded action.