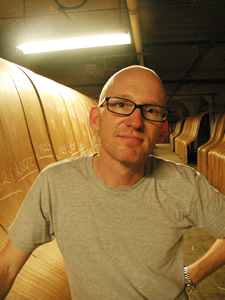 I met with Ben Niles on May 31, 2008 in San Francisco. The following is a shortened transcript of the interview.

ESM: Would you tell me a bit about your background?

Niles: Well, I grew up in Atlanta, Georgia. I studied at the University of Georgia Art School and for two summers in Cortona, Italy. Then I followed the family path and became an advertising art director. I left for New York in 1994, and after six months, I got a job at Atlantic records.

Niles: New York was a breath of fresh air. I loved it. It was my dream to work with musicians.

ESM: How did you work with them?

Niles: I produced a lot of photo shoots. I didn’t work with very big bands; most of the bands that I worked with went straight to the dollar bin. It was a real eye-opener.

The business model is changing and has changed for music and film. For music, it was to throw the single on the radio. The equivalent for films is to try to get it in one of the big five festivals, and see if it sticks. If it doesn’t stick, your film sales agent or the record company goes on to the next thing.

After a little while, I started to get jaded at Atlantic, because these guys would come into my office, we’d talk about the artwork, and I’d see stars in their eyes. They’d get wined and dined for a few nights, and a few months later, it was over. That really taught me a lesson about the business model today for film. The first thing I was advised about is to make sure I keep the DVD rights to my film. Then, as an individual, I will always have a chance to give it life.

ESM: And market it yourself…

Niles: …And that’s what we’re doing.

ESM: How did the Steinway film idea present itself to you? How did that happen?

Niles: I was reading the New York Times one morning about Steinway making pianos the old-fashioned way. I thought that this is so much more dynamic and involved than I ever imagined. Every piano is an individual.

So I called the factory the next day, thinking, “They didn’t know who I was, I had no resume, I didn’t have anything to show them” and they were foolish enough to invite me out to the factory. To this day, I can’t explain why I had the opportunity to do this. I went every day, and after a while, they got tired of walking me around while I was shooting and said, “Just go ahead.”

ESM: How did you fund the film?

Niles: A lot of it was self-funded. Atlantic was looking for seasoned art directors to take care of photo shoots freelance. I had my own office there, so after I finished my work for Atlantic, I could call people, put proposals together. In the end, Atlantic was the best thing that ever happened to me two times.

ESM: Did you get to know the factory workers very well? They seemed to open up to you.

Niles: People say that and I love hearing that, because I think it is important for a director to do that with your subjects. They have a lot of photographers and TV crews coming in there, and they shoot them and then go away. But no one ever tells them where it’s shown, when it’s shown.

They saw us come in so regularly that they really started to buy into it. They thought, “This guy is very serious about what he’s doing.” They’d say, “You again? Why today?” And I’d say that the piano was going to be lacquered today…or strung today.

Then when it opened at Film Forum, they all came. They got standing ovations. It was really nice to see.

ESM: And well deserved. One of the things that made the film special for me was their pride in their work and their talent.

Niles: They grow these people; they just can’t put an ad in the paper for a bellyman. When you come from another country, or just from Long Island, and you’re looking for a job, they say here’s a broom; and five years later, you’re tuning pianos.

ESM: How did Steinway enable you, aside from giving you the run of the factory? Did Mr. Steinway give you a lot of information about the history of the firm? Did they give you monetary compensation? Did they spend a lot of time with you that wasn’t filmed?

Niles: No, no and no. I knew from the get-go that I wasn’t going to ask them for money, and if offered, I wouldn’t take it, or no one would look at the film objectively or accept it. That was frustrating, since I knew that they could make a couple of calls and it would all happen for me. But they were helpful with suggestions, but very hands off. We didn’t want to get into the corporate side at all. For me it was all about tradition vs. technology, old blue-collar versus white collar.

Niles: Henry is the last Steinway to have worked in the factory. He’s now 93-94. He sold the company in 1980 to CBS and it’s been sold several times since then. Now it’s publicly traded and owned by two guys from Wall Street.

ESM: You went to the annual Steinway sale for one or two days. How did you figure out whom to focus on?

Niles: It was a shot in the dark. At first, I thought, “I’m not interested in the sale side of the story,” but then, I thought, “What the heck, it’s only videotape,” and we went and started shooting people. I met the Reichel family. They were so animated, wanting to buy a piano for the grandfather. They gave me permission to stay on top of them.

ESM: The piano delivery was a moving moment.

Niles: For me as well. I love what the piano represents there and has represented for so many decades.

ESM: Where do you go from here?

Niles: As eager as I am to jump into another project, this film is still without distribution, though we’re still talking to people. It continues to get picked up. We will have played in 70 markets by October. Jim Brown, of Argot Pictures, a few interns and I are constantly emailing piano teachers, cabinetmakers, and craftsmen: “The film will be shown there in July. Make sure to go.” I just have to hope that it doesn’t come to a complete halt.

ESM: In terms of success, is there a distinction in your mind between the way your film is being distributed and a regular theatrical distribution?

Niles: We are making money on the theatricals, which is hard to do. We’re finding an audience, and thankfully, it seems that the story is timeless. PBS has picked it up for a prime time slot next year. I’m happy that I have control over the film.

ESM: Do you always travel with the film?

Niles: I have traveled a lot this year. But I don’t go everywhere. If I can sell the DVDs, it’s worth my while. It’s been an eye-opener, a viral grass roots marketing. When the film gets a booking, Argot Pictures alerts Steinway, who gets in touch with the piano dealer in that area. They can work with the theater, fly the actual piano #L1037 in, get me out there to do a Q and A. We all get the publicity inexpensively. The audience loves to see the piano. So it’s fun. I feel like I’m going to festivals all the time.