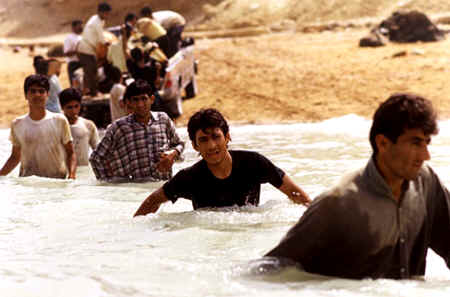 "She’s my daughter. I’ll kill her if I want to," states a father midway through Iron Island, commenting on his offspring’s dishonorable behavior. She (the nameless Girl played by Neda Pakdaman) committed the crime of accepting a letter from Ahmad (Hossein Farzi-Zadeh), a young man who is in love with her. Patriarchy rules on the abandoned and sinking oil tanker anchored offshore in the Persian Gulf where The Girl lives.

In another scene, the attempt to take a woman who is bleeding to death while giving birth off the boat and to the hospital is delayed by the following remark: "Her husband is not here, she needs to wear her burka." Hundreds of women, children, and men reside and work on this vessel &#150; a community of displaced Bandaris, indigenous impoverished Sunni Muslim coastal dwellers (the word "Bandari" means "port" in Farsi) of Arab descent who constitute 3% of the population of Iran and who speak Arabic rather than Farsi.

Played by a predominantly nonprofessional cast, these characters are subject to the authoritarian control of Captain Nemat (veteran actor Ali Nasirian). He presides over every aspect of the ship’s daily existence, from distributing medicine to dispensing advice, collecting rent (rather, subtracting it from the workers’ salaries), as well as engaging in acts of discipline bordering on cruelty. Ahmad is unreceptive to the Captain’s command not to interfere with the marriage he has arranged between a wealthy older man and the girl the boy loves. He steals a motorboat and runs away, only to be brought back to the tanker, where he is tied to a platform and lowered into the water several times until, on the verge of drowning, he begs for forgiveness, as the rest of the community watches such an exemplary punishment, speechless.

The film’s title conveys both a literal and a symbolic meaning: the tanker is made of iron and is ruled by Captain Nemat with an iron hand. Yet, this character is more complex than the despot he plays. A member of the same community he leads (like the other men, he wears the traditional thobe, a floor-length shirt-dress and the gutra, a loose headscarf, but adds a western-style suit jacket), the Captain promises his "crew" a home ashore and lures them off the ship with an impassionate speech. "This ship’s sinking everyday. We have to leave as quickly as possible. I want you to help each other, so we can build a town on dry land, a town with a house for each one of you. We won’t let go of each other, we’re used to one another. And you all have to give me the power of attorney so I can take care of the land. As long as I’m with you, you shouldn’t worry about a thing."

Is Nemet a callous profiteer or a tyrant with a heart of gold? Iron Island provides no comforting answers, choosing instead to remain ambiguous, as the closing image of a child running towards the vast nothingness of the sea attests (as well as paying homage to Truffaut).

Written, produced, and directed by Mohammad Rasoulof, the film employs exquisite mise-en-scene and framing, reminiscent of Michelangelo Antonioni’s color films from the Sixties, highlighted by a minimal use of camera movement that gives Iron Island its languid pace.