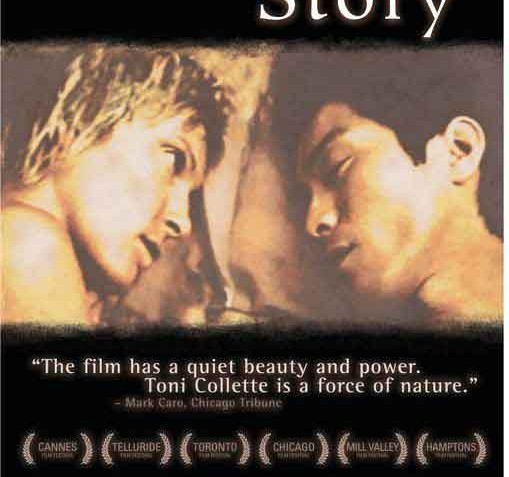 There are three principal characters in Sue Brooks’ film, Japanese Story: Sandy Edwards (Toni Collette), an Australian geologist; Tachibana Hiromitsu (Gotaro Tsunashima), a Japanese businessman; and the astounding and austerely grand landscape of the Pilbara in Western Australia, an equally strong presence in the film.

Edwards, protesting vehemently to her boss, unwillingly takes on the task of showing Hiromitsu around when he comes to Australia to see the corporate iron mining operation in Newman. (Her firm is a client of the mining company.) When Hiromitsu is introduced to Edwards, he visibly backs off–a woman "driver" runs counter to his cultural expectations. They are shown the surreal-looking refinery (a mammoth maze of wooden trestles and conveyors) and the enormous pit mine gouged out of the earth ("It looks like a Mayan temple!").

Business purpose accomplished, Hiromitsu wants to see more of the area and, despite the pronounced coolness between them, they drive off together into the remote desert. Alison Tilson’s screenplay explores the cultural differences between the bluff, independent Australian woman and the conservative, tradition-bound Japanese executive. Each seems to use their differences defensively, reinforcing their initial mutual hostility. When they meet, for example, Hiromitsu doesn’t let on that he knows a good bit of English. Edwards is odd person out in the ritual exchanging of business cards.

Hiromitsu is in awe and somewhat frightened by the emptiness around them, noting that in Australia there’s a lot of space, but no people, while in Japan there are a lot of people, but no space. There’s nothing like a crisis to break down barriers. When the van gets stuck in the deep sand of an unpaved road, they are in real danger–isolated in this back country far from help. Their shared vulnerability is the catalyst that finally starts some chemistry between them. Not only does communication improve, but a deeper connection slowly blooms.

Both characters are nicely developed and both of them grow and change as a result of their shared experiences. A variety of occurrences are used to reveal character, from a rather banal karaoke bar scene to a wonderful exploration of the many meanings of the word "hai." While Collette has drawn wide attention for this film, both leads deliver equally skilled performances, richly fleshing out the characterizations.

But the narrative loses steam in all its wanderings around the desert, and, after a plot twist, gets heavily bogged down in predictable sentiment, further emphasized by a monotonous, saccharine soundtrack by Elizabeth Drake.

Japanese Storyunfortunately loses its way in its ramblings, playing for the emotional payback instead of sticking with its perceptively observed cross-cultural character study. Still, it is episodically effective and the likable characters and ever-present splendor of the desert landscape register strongly.