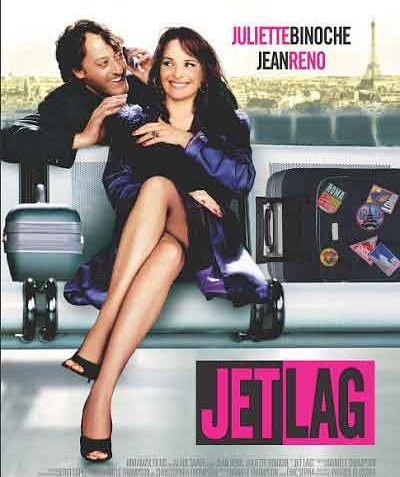 Jet Lag is not so much about jet lag as about technology lag. The French, way ahead in this particular technology, have beaten us to the punch with the first cell-phone romantic comedy, thereby keeping Hollywood from wrapping up the Tom Hanks-Meg Ryan trifecta that began sleeplessly in Seattle and went on to romancing by e-mail.

Instead we get Juliette Binoche and Jean Reno, providing less sugar and more spice and a welcome dose of Gallic je ne sais quoi. In spite of the cell phone gags, all of them awful, the movie’s quite entertaining, primarily because the leads are, well, grownups. In her first scenes Binoche appears over-lacquered and badly coiffed, looking like any other beautiful movie star — perfect and boring — but fortunately takes a shower halfway through the movie, emerging tousled and sans maquillage, et voila: Juliette Binoche! The guy doesn’t stand a chance.

Reno has forsaken his supercool psychopath look for fashionably long hair and a three-day beard, but retains the sad sack bloodhound eyes that are such an intrinsic part of his charm. He does a good job as a hypochondriacal workaholic, obsessing over his ex-wife, warding off anxiety attacks with a variety of pills and sprays, polluting his speech with the latest trendy English buzzwords. "Le marketing c’est du bullshit," he explains to a colleague on the telephone.

Binoche and Reno meet at Charles de Gaulle Airport in Paris, where they have both been stranded by weather and the all-too-common French general strike. Thierry (Reno) is a frozen food executive rushing to Munich for a funeral and a possible rendez-vous with his ex-wife; Rose (Binoche) is a beautician on the lam from her abusive boyfriend, whom she has finally worked up the nerve to leave after a 12-year affair. She manages to flush her cell phone down the toilet, asks Thierry if she may borrow his … and so on, for a tiresome series of cell phone routines that are supposed to be funny but succeed only in reminding you how obnoxious the things really are.

Fortunately, the movie drops the cell phone shtick after a half hour or so and settles down to the serious business of getting its leads to fall for each other. After Thierry proves his mettle in a difficult encounter with Sergio (Sergi Lopez), the explosive boyfriend, the two anxiety-ridden strangers wind up sharing a hotel bedroom for the night, where she takes the abovementioned shower, the makeup drops from her face and the scales from his eyes and they’re hooked.

There are some nice French touches along the way. Rose freely admits that her parents are communists (can you see Meg Ryan playing a character named after Rosa Luxembourg?) and professes a gently swinging personal philosophy that somehow wouldn’t work in a Hollywood product without sounding sluttish. And Thierry is so un-Frenchly uptight that one suspects the whole character is a sendup of the American businessman. Only when they break into the hotel kitchen so he can cook her veal mignonettes (the recipe for which is thoughtfully provided in the credits) does the food-loving Frenchman break through the master-of-the-universe pastiche.

Still, in spite of its Gallic charm, Jet Lag is little more than an add-water-and-mix meet-cute love story. Director Daniele Thompson has the formula down pat: there’s the obligatory three-second nudie shot when Rose takes a midnight skinny dip in the hotel pool, as well as the requisite drive down the highway (in an airport movie!) to introduce the song that accompanies the credits. There’s no slo-mo, thank God, but that’s about the only cliche the movie doesn’t deliver.

Hollywood must be slavering for the remake rights, with Nokia fighting hard for the starring role. Le marketing c’est du bullshit.