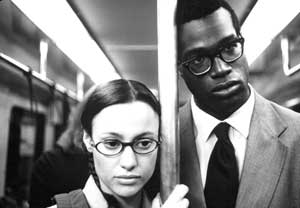 With its lollipop colors and the breezy la-la-la’s on the soundtrack, Jump Tomorrow is a charmingly kitschy trifle. Director Joel Hopkins has jerry-rigged a unique comic style from the oddball tics of several unlikely directors and genres. The choppy rhythms, weirdly distorting closeups and pixilated tone suggest Wes Anderson; the misbehaving machines and meticulously framed sight gags, Jacques Tati. As in Jim Jarmusch, the characters are all immigrants butting heads against the romantic possibilities of America. There’s a dance scene straight out of Hal Hartley’s Simple Men, and The Graduate pops up throughout. It’s a hit and miss proposition – some scenes achieve the frothy lunacy of the thirties screwballs it models its plot from, while some drown in cloying sweetness.

Tunde Adebimpe plays George, a Nigerian raised in New York by a doting uncle after the death of his parents. George is three days away from an arranged wedding that he’s too much the dutiful, accommodating nephew to protest. Instead, he acts out unconsciously, missing his fiancee’s flight by a day and accidentally leaving her to fend for herself, thus gaining himself three more days of freedom. When he meets Alicia (Natalia Verbeke) at the airport, she provides a perfect focus for his anxieties, a whimsical, crazily attractive Spaniard who’s as open and spontaneous as he is closed and remote. She invites him to a party but he’s too flustered (and guilty about his attraction) to say yes.

In another terminal, we find Gerard (Hippolyte Girardot), a Frenchman so hopelessly romantic he drives a Citroen with "L’AMOUR" vanity plates, in the midst of a proposal. By this point we’ve become so used to George being crowded into the corner of the frame with a too-close camera that we barely register the way that Hopkins gives Gerard a wide frame and room to maneuver. It’s a smart piece of directing, and it pays off: Gerard’s scene feels so different from what we’ve seen so far that it plays as an aside, a grace note to George’s story. When Gerard falls into the narrative – when, in fact, he becomes the motor that drives George to act – it’s genuinely unexpected.

George and Gerard go to the party, George to meet Alicia, Gerard to dull the pain of yet another failed romance. From the moment Alicia calls George "Jorge" you know he’s a goner – he’ll do anything to win her over, even though she and her boyfriend, a New Agey Englishman named Nathan (James Wilby), are hitchhiking to Canada the next morning. Within a few hours George and Gerard are on the road, taking the long way to Niagara Falls for the wedding and keeping an eye out for the hitchhikers.

As the story unfolds Alicia turns out to feel as trapped as George. Nathan is a self-important fool – he drops perfect phrasebook Cantonese into casual conversation and practices Tai Chi in the rain – and Alicia’s only starting to realize that he’ll smother her if they stay together. The final outcome is obvious from that first scene in the airport, but Hopkins scatters enough obstacles in the lovers’ paths to keeps us pleasantly off balance, wondering right up to the end just how

they’ll manage to wind up together.

All awkward discomfort, looking like he’d claw his way out of his hornrimmed glasses and conservative gray suit if he could just muster the courage to make eye contact with someone, Adebimpe’s George is a comic nightmare of self-consciousness. Hopkins uses Adebimpe’s hulking physical presence for laughs, framing him to emphasize his jowls or offsetting his solemn gravity with the goofy decor, all scaled a bit too small for him so that he looks lost in a child’s playroom. It’s a lovely performance.

Adebimpe fares better than his co-stars, if only because Hopkins’ script feeds them all the bad lines. Girardot has inspired moments but is too often stuck playing the sad voice of doomed romance. When he’s goosing George’s courage on a dance floor or arguing with Nathan about French culture, he’s delightful, but when he’s learning life lessons from an enigmatic ten year old or cooking sensual desserts for Alicia’s mother (Patricia Mauceri), it’s as though he’s trapped in another movie, a sappy Euroromance about quirky lovers in a quaint provincial village.

As Jump Tomorrow stumbles to a close, it loses the off-kilter visual assurance of its opening and begins to look more and more conventional. Adebimpe’s performance survives, but just barely, and the conclusion is satisfying enough to deflect attention from how badly the film derailed towards the end. Perhaps in his second outing Hopkins will manage to harness his eccentricities into a film that’s as unique as the best of his debut.