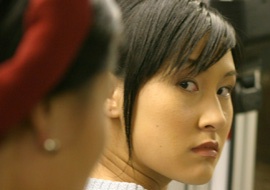 The Tale of Kieu, Vietnam&#146;s much beloved epic national poem, was composed in the early nineteenth century by Nguyen Du. It tells the story of a young, beautiful, educated woman who was visited upon by great tragedy. Her father and brother were imprisoned and Kieu was forced to sell herself to save her family. Thereupon followed much suffering and hardship, catastrophe after catastrophe. Through it all, she stayed faithful to the young man Kim Trong. A story of the struggle between fate and individual action, it is Kieu&#146;s spiritual constancy that eventually sees her through and redeems her family&#146;s debt.

As director Vu T. Thus Ha&#146;s film Kieu opens, dark, choppy, open water fills the screen. The sound of paddles against water, the methodical rhythm of rowing creates a counterpoint to the low splashing of waves. A voice cries out. The scene cuts abruptly to a bright, sunny room. The morning sun is streaming in and a young, beautiful Vietnamese-American woman is waking up in her San Francisco Mission District flat. The camera pans around her apartment, a cheery gold fish swims in its bowl. Kieu holds up a mirror to the fish and teases it for being vain. She waters orchid plants in the sink, arranges fresh lettuce leaves, and tears a sheet off the daily calendar. It is September 6, 2004.

Has the woman been having a bad dream? What subconscious fears are stirring within her? With so little revealed, it is hard not to believe her life is anything but happy, tranquil, and fulfilling, an advertisement for how any immigrant can live the American Dream. Director Vu presents one 24-hour day in the life of Thuy Kieu, a young woman, a survivor, an immigrant of the Vietnamese "boat people generation." Kieu must depend upon a job as at a Tenderloin massage parlor for economic survival and the muddy soil which her apparently dreamy life is springs from is about to be exposed.

This is not just any day, but the anniversary of the death of Kieu&#146;s brother. As the day passes, the scenes progress from sunny and cheerful interactions in the neighborhood to falling darkness, night, and night work at the "Oriental" massage parlor. As Kieu moves through her world, different visual fragments erupt, then merge. A letter from family still in Vietnam triggers memories and flashbacks of her old life, of her brother alive, of the gap between the American Dream as imagined in Vietnam and as she is living it today. A mysterious, red-bereted woman, oracle-like, recites lines from The Tale of Kieu. Duy, the handsome, young greengrocer she had flirted on her way to work crosses paths again with Kieu in the wee hours as he is setting up shop. Seeing Kieu coming home from work, Duy realizes the nature of her employment. Various mutually exclusive elements of their bicultural consciousness come together in this moment.

In the lead role of Thuy Kieu, Bay Area native Kathy Uyen strikes a supple balance between the twenty-first century San Franciscan&#151;daughter, sister, neighbor, love-struck single woman, refugee/survivor, masseuse&#151;and the embodiment of an epic literary heroine. Even as Kieu faces and contains the contradictory fragments of her deeply troubled past and present, symbolically redeeming her family&#146;s debt, director Vu has also created through Kieu a contemporary immigrant everywoman who embodies the predicament of Asian sex workers in the massage parlor industry. The filmmaker collective visited and consulted with many of these women in their workplaces in San Francisco as well as in Vietville (in Palawan, Philippines), perhaps the last remaining boat refugee camp. Rather than slipping into cheesy propaganda or soap operatic melodrama, Kieu unfolds, like a magnificent blossom, part documentary, part chamber drama, and part mythic quest, always intelligent and engaging.