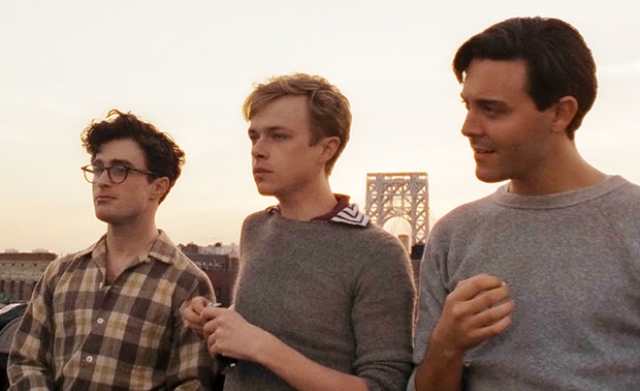 “Nude no more!” shouted an otherwise sober Guardian when Daniel Radcliffe threatened to stay clothed in his next project (“A Young Doctor’s Notebook,” in which he shares a tiny bathtub with large Jon Hamm).

“I’ve been naked in my last three movies,” demurred the former Harry Potter. “…Sooner or later everyone’s going to assume I’m an exhibitionist.”

Well, perhaps after his surprising new turn as 17-year-old Allen Ginsberg in “Kill Your Darlings”—about which a gay friend adds: “I really like Daniel Radcliffe. He’s working so hard to put Harry Potter behind him,” they might.

And I promise you on the grave of Voldemort that Harry Potter will never enter your mind once. In Darlings, he’s explicitly gay, and a Jewish nebbish, funny too.
At Venice, Radcliffe was asked by an Italian journalist if he wanted to put “a knife in the back of “‘arry Pottuh.” But gay sex was the story, Radcliffe responded.
(Cher may seethe—hot competition in the gay icon stakes.)

Both pun and editing tip, the movie’s title teases by referencing a chapter in Ginsberg’s own diaries about his early loves. The young Ginsberg’s wide, bespectacled gaze follows a descent into bohemian New York up to a bitter finale.

The result is a biopic-love story-mystery about the Beats’ formative years. It begins in 1944. Ginsberg is upsetting his unstable mother (heartbreaking Jennifer Jason Leigh) and poet father (David Cross) with the news he’s just won a place to study at Columbia University.

A Yale theater graduate, director John Krokidas teaches film at USC and this is his full-length first movie, with a script co-written with college roomie Austin Bunn. They researched five years, avoiding previous Beat pics, “though this couldn’t have been made without ’em.”

Sighs Krokidas: “There’s so much out there about all this, including “And The Hippos Were Boiled In Their Tanks” (2008; Kerouac/Burroughs; written 1945). He and Bunn researched everything, even Stanford’s Ginsberg archives, till they were exasperated.

“Dead Poets Society” gone punk: but no beard, no beads, no oms. The movie was five years in the making, but took off after 2013’s Sundance, Toronto and Venice festivals.

“I had to declare a moratorium in 1945. I wanted it to be a bunch of ‘first times’—first party, first love, first loss, showing how the dutiful, closeted son becomes the rebel poet.”

The two were highly collaborative. Krokidas asked Daniel how he preferred to act. He’d been an intuitive natural, he replied. So why not follow Sanford Meisner’s methodist teaching then, Krokidas suggested: “so great for bright people.” Radcliffe was game.

“And Daniel nailed it!” Krokidas says with his bright, boyish, delighted, encouraging grin.

Soon, Allen was writing Lucien’s papers and upsetting Columbia’s academics. Together, they spearhead the “New Vision” movement and “Libertine Circle.”

As Lucien, Dane DeHaan chews up scenery, from books to librarians. “My partner of ten years told me I would wind up casting Dane DeHaan. I did.” He adds a harrowing coda of the scene where DeHaan strips and drags Kammerer into the Hudson.

Much comes from Ginsberg and Kerouac’s memoirs in which the poets cruise Harlem and the Village, doing drugs and drink, as Kerouac (Jack Huston) is barely glimpsed by his lover (Elizabeth Olson) while Lucien’s ex-lover David Kammerer (Michael C. Hall) stalks him.

Burroughs convinces Lucien to turn himself in. David’s body is found, he and Kerouac are arrested, and beg Ginsberg to write a deposition maintaining it was “an honor slaying”—self-defense. But Ginsberg’s response is compromised by glimpses of a different, relentless folie à deux.

“Clearly this was an incredibly toxic relationship. But a woman friend said Kammerer tried to end it repeatedly,” Krokidas says. When he was 11, Kammerer was the fatherless Lucien’s scoutmaster, and his mother had to spirit him away repeatedly. “There were two sides. We know couples like this, relationships that end badly, if not as badly as this.”

Remarkably, Allen and Lucien remained friends all their lives.

Less surprisingly, Lucien (who became UPI’s New York bureau chief) stopped the publication of “Hippos” and asked Ginsberg to take his name off the dedication in “Howl.”