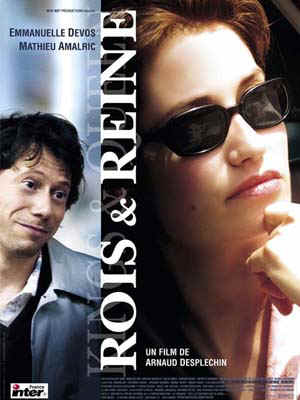 She is a beautiful young woman, the epitome of French elegance, as she steps out of a car in the opening sequence of the film. The air seems to be glowing around her, as if she were a young Catherine Deneuve. What follows is the "deconstruction" of Nora (Emmanuelle Devos) with the richness of a great novel. (Deneuve herself shows up later, in a small role.)

Arnaud Desplechin’s Kings and Queen is an extraordinary work with depth, suspense, startling surprises, a unique combination of perspectives. There are many movies with well-portrayed characters, and some – fewer – works (more frequently in books than on screen) that plumb "inside" the people they portray. Desplechin enables the audience to experience the connected, but almost always separately-presented dimensions, internal and external.

In this virtuoso work, Desplechin tells the story of Nora and her ex-boyfriend, Ismael (Mathieu Amalric), a mad violist (is there any other kind?), keeping them apart through almost the entire length of the film. He stays with the two (and a large, intriguing cast of characters) for two and a half hours, time that passes almost imperceptibly. The characters are seen from the outside, as well as in their thoughts, their past, their evolution/devolution. Desplechin’s brilliant writing and direction reveals them, both to themselves and to the audience, providing a new, elegant and fascinating standard for adult story-telling. For example, an illustrated narration of a wild dream is traced to a Yeats poem in an incongruous way. Yet, because it makes sense to the character, it is also perfectly satisfying to the viewer.

Kings & Queen moves smoothly back and forth in time and switches between dimensions without clear visual clues that distinguish what is "reality" from what is a character’s dream or fantasy. It demands a great deal in attention, concentration, suspension of both disbelief and beliefs. But there is nothing artsy-crafty about Desplechin’s work. It’s just a terrific movie with no wires showing, all its complexity presented without visible effort.

There is a cosmic shift from the audience’s early impressions of Nora and her father, triggered when Nora reads a stunning piece of writing by her father which reorders and reinterprets the characters and their relationships. The structure of the film flows from these elements, in a quirky but inevitable way. As in his last major film, the 1996 My Sex Life, or, How I Got Into an Argument, Desplechin dishes up both entertainment and substance to chew on in Kings and Queen.