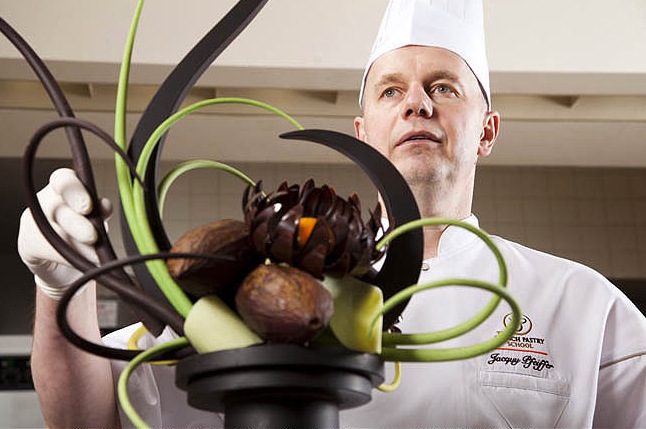 Chef Jacquy Pfeiffer at the French Pastry School in Chicago

Only in France do the most talented artisans compete every four years for the honor of being called Un des Meilleurs Ouvriers de France (One of the Best Craftsmen of France, or, MOF).

“Kings of Pastry,” the fascinating documentary by Chris Hegedus and D. A. Pennebaker, explores the never-before-filmed pastry division of the MOF contest. The competition lasts for three grueling days during which chefs are graded on their mastery of skills and the tastiness and artistic qualities of their confections, as well as the cleanliness of their aprons and workstations.

The judges include France’s most distinguished chefs, who can award the MOF to as many applicants as they deem worthy. Winners receive a chef’s jacket adorned with a collar in the blue, white and red colors of the French flag and a medal conferred by the President of France. But it is the admiration of their MOF colleagues that is the ultimate recognition for the pastry chefs.

The filmmakers first heard about the MOF contest from a friend who had attended the French Pastry School in Chicago, founded by the French chefs Sébastien Canonne, a former winner of the competition, and Jacquy Pfeiffer, an Alsace born chef who was then busy preparing for the 2007 competition. Pfeiffer, who became the central character in the movie, was filmed during months of preparation and through the final competition in Lyons.

The sixteen chefs competing in Lyon have spent years honing their skills, aiming for the highest degree of perfection. For the contest, they are required to prepare almost forty varieties of pastry including a tiered wedding cake, delicate cream puffs and chocolates, tea pastries and jams, a chocolate sculpture and a towering decorative sculpture piece made of blown, pulled and spun sugar.

It was enthralling to watch the chefs twist spun sugar and use their artistry to prepare elaborate decorations and sculptures. It is also necessary for them to understand the chemistry and physics of preparation and baking, for example, how the humidity in the kitchen affects spun sugar. They also must master the skill of carrying their pastries, including their chocolate sculpture and sugar sculpture, out of the kitchen, through a series of rooms, up a staircase and through winding halls to their display tables without dropping or damaging them.

The most emotional scene in the film involves a chef overcoming the agony of dropping his sugar sculpture just before the judging begins. Audiences scream as they watch the sculpture and his face drop. As he walks out of the kitchen defeated, one can see that his dreams have been shattered along with his dazzling sugar piece. His helpers, colleagues, and judges rally around him and succeed in convincing him to soldier on. It was heartening to see the emotional and supportive bond among the MOF contenders, unlike in American TV’s cooking competition where the goal is to beat out all the other chefs. The 2007 Lyons competition awarded a MOF to five of the sixteen hopefuls.

“Kings of Pastry” is not typical fare for Chris Hegedus and D. A. Pennebaker, the American husband and wife team known for direct and uncompromising documentaries from “Don’t Look Back” (1967), D.A. Pennebaker’s film that covers Bob Dylan’s 1965 concert tour of the U. K. to “The War Room” (1993), which follows Bill Clinton’s first presidential campaign.

Although “Kings of Pastry” would seem unlikely to hold one’s interest or to convey a greater meaning than a mere cooking contest, through highly skilled directing and editing, this documentary comes alive with universal concerns and emotional content. Ms. Hegedus in a September 1, 2010 New York Times interview aptly said, “It’s a microcosm of larger issues that people have in their life about being passionate about what they’re doing and trying to do it on the best level possible and creating meaning in what you’re doing. It’s about much more than just making cream puffs.”

Now, if only “Kings of Pastry” tickets came with samples of the scrumptious pastries …