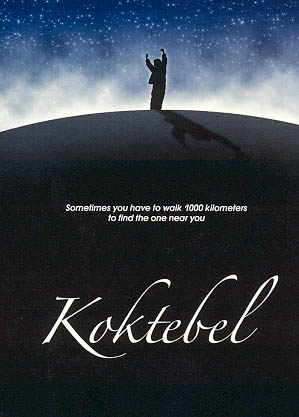 The only real antagonist in the contemplative and understated Russian film Koktebel is vodka. Russian film, literature, and opera frequently display an acute awareness of the widespread predilection for the potent liquor amongst the Russian people and the vodka drunkard is a stock character. (Only the Irish seem more obsessed with national patterns of alcoholism.)

Koktebel is a beach resort in the Crimea, on the Black Sea, in a geographical area where the protection of steep mountain slopes has created a subtropical climate. In the film it is the residence of the sister of the Father (who is never named in the film). After the death of his wife and a slide into drink, he resolves to give up the bottle and sets off with his eleven-year-old son (also unnamed) for Koktebel, presumably in hope of a fresh start. Koktebel, then, is a road movie, the story of their journey, both literally and–could it be otherwise?–metaphorically.

The early sequences show man and boy hiking and jumping freight trains, enduring rain and cold. A kind trainman provides some food–and vodka, which the father resists. In a light touch of magical realism, the boy confides in a girl met in passing that he can close his eyes and get a bird’s eye view of the area. It’s an extension of his freedom fantasy–the freedom of a hawk coasting high on air currents which he and his father later observe. And, his father tells him, the albatross, with a huge wingspan can soar effortlessly for hours. Adding to the conceit of freedom though flying, as well as the attraction of Koktebel, is that the town, due to prevailing winds, is a center for gliding; there’s even a monument to gliders.

At a later stop on their journey, the father asks a local peasant for work fixing the roof of his shabby old farmhouse. The old man turns out to be a rather paranoid drunkard and this time Father gives in to the irresistible draw of the bottle. It’s the first in a sequence of events that threaten to bring the journey to an end before the sea is ever reached. And, if the sea is reached, will it be a liberation or, as in the classic 400 Blows, will it prove to be an insuperable barrier?

Koktebel is enhanced by elegant cinematography (Shandor Berkeshi) and a director’s eye that surely has been influenced by the Dardenne brothers (The Son, Rosetta): scenes in which the camera angle is at near ground level; long static takes with a still camera with not a great deal happening, a spare use of dialogue. But the Dardennes use their severe, minimalist style to build character and situations of depth and complexity. Koktobel doesn’t get much below the surface of father or son; their impassive faces reveal little beyond the obvious. So when the son in once instance displays a surge of emotion (by himself, at a crucial juncture of boy-into-manhood), it’s impossible to feel much for him, since the character as depicted simply hasn’t earned the response.

Credit the directing duo, Boris Khlebnikov and Alexei Popogrebsky, with the good taste not to sentimentalize subject matter all too frequently soaked in saccharine. But even dedicated art house regulars will find the pacing to be torpid and the rewards of Koktebel to be insufficient.