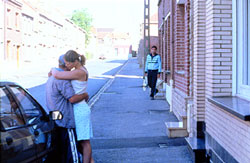 Landscapes of Loss: The National Past in Postwar

L’ Humanite opens with a prelude, a long take in black and white of a landscape seen from a distance and at a low angle, two trees looming to the left. The small figure of a man crosses the horizon from left to right silhouetted against the gray sky. It is an homage to Bergman and an indication of shared interest in Bergman’s themes.

Were Bruno Dumont a lesser director, the opening might seem presumptuous, but it isn’t: L’ Humanite is a challenging film, by far the most interesting and profound new release of this (dismal) year – or many another. Using pronouncedly nonverbal characters through whom he explores both psychological and philosophical aspects of the human condition, Dumont makes no compromises for the commercial market. Running nearly two and a half hours,L’ Humanite is full of scenes in which very little happens and even less is spoken. But Dumont’s filmic vision is so fresh and his story so rich in perception and so laden with artful ambiguity that it isn’t dull for a moment. On the contrary, it is both intense and intensely fascinating. Dumont is not only a director with interesting things to say (the screenplay is also his), he is a filmmaker powerfully in control of his medium.

The central character is Pharaon De Winter (Emmanuel Schotte), a police superintendent in a small working-class town in the north of France. De Winter is investigating the rape, mutilation, and murder of an eleven-year-old girl, a crime so disturbing that he flings himself to the earth as if to reconnect with a more acceptable reality and he uses the roar of a bullet train to drown out his scream of anguish, the pain of the violated. (Dumont’s use of sounds for dramatic effect is notable – the train, the wind, the sea, even the peeling of a potato. The senses of smell and taste are also integral to the telling of his story.) A scene of De Winter choking on an apple is an early clue of things to come.

While the arching line of the film is within a police procedural format, "who done it" becomes less important than connecting the meanings of each scene that Dumont lays out in a series of clues adding up to his statement of theme. De Winter had and lost a woman and their child; whether they were married, and how and why he lost them is never disclosed. It is the loss, then, the disconnection that interests Dumont. Indeed, all the relationships depicted in L’Humanite are sadly incomplete. De Winter lives with his mother, a character embodying the protective and meddling traits of motherhood and a source of annoyance to her son. Their only connection appears to be that which comes from their predefined roles of mother and son. (Like a small boy, he obediently carries the market basket for his mother when they go off shopping.)

More central are De Winter’s next door neighbor, Domino (Severine Caneele) and her boyfriend Joseph (Philippe Tullier). There are a number of scenes of De Winter and Domino simply hanging out, saying little, standing in front of their brick row houses, watching the traffic go by. De Winter’s longing is palpable, but it is a longing for connection, not for sex: when Domino does offer favors, he refuses. Several graphic and explicitly sexual scenes between Domino and Joseph are clinical in their observation of an almost animal passion – there is little tenderness in this sex and the partners do not kiss. When Domino whispers to Joseph in a cafe that she loves him, his only response is physical – they stroke each other’s hands, love remaining far more elusive than lust.

De Winter visits a mental hospital, thinking that, perhaps, an inmate was the murderer. It’s a red herring, since it quickly becomes obvious that tight security at the hospital would preclude the possibility, but it allows Dumont to show De Winter’s response to this manicured and controlled environment. It is a haven from the anarchic real world – a world where restaurant dinners are interrupted by loud and drunken partiers, where trucks speed dangerously down town streets, where children are raped and murdered.

By the time an arrest is finally made, Dumont has all but abandoned the plotting and the logic of the police procedural. He doesn’t provide a clue as to how the investigators were led to the perpetrator (although his presence in the area of the crime had been established). Far more important is De Winter’s response, a gesture of passionate (but asexual) feeling that is rooted in his inarticulate identification with and empathy for the humanity of the perpetrator – as deeply felt as earlier when he screamed for the victim. It is a profoundly Christian response that now emerges out of the bleak, existential viewpoint with which the film is imbued up to that moment.

Immediately after, in his final scene, Dumont gives us an image of startling visual simplicity that is riveting in impact – De Winter finally emerges as an Everyman, as a Christlike figure taking on the horrific sins of all humanity.