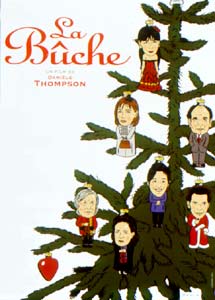 La Buche is billed as a comedy and there are some funny moments in it, such as when a cell phone starts ringing as a coffin is lowered into a grave during a funeral scene. Nobody is quite sure whose phone it is–it seems they all have one in purse or pocket–and they all seem too embarrassed to answer due to the solemnity of the occasion. Then they discover whose phone it is… In another scene, one of the characters remembers the night she lost her viriginity and comes up with a very funny line to describe the event–which will not be revealed here either.

But while La Buche has a tone of rueful satire it is more a family drama than a comedy. Against a background of the Christmas holidays in Paris, with all the consumer excess of the season and sentimental Christmas music tinkling on the soundtrack, Sonia (Emmanuelle Beart), one of three sisters, prepares to host the family Christmas dinner. The first issue, complicated by the death of her mother’s second husband, is who will be attending. Co-writer/director Danielle Thompson hits what must be a universal note right on target–all the shifting decisions about who will be there and who won’t, who will bring whom, who won’t come if someone else will be there.

Sonia has it all–a successful, goodlooking husband, kids, a lovely home. But it turns out the husband has a mistress and Sonia’s been messing around on the side with a florist. All is not well behind the facade of perfection. Her sister Louba (Sabine Azema), sings in costume in a Russian nightclub, lives with their aging father (Claude Rich), and has been having an affair for twelve years with a married man, by whom she is now, at age 42, pregnant. The youngest of the three sisters is Milla (Charlotte Gainsbourg) who is smart, alienated, and unlucky at love.

In addition to the daughters’ complicated lives, La Buche deals with the estranged parents’ relationship, as well as a handsome young tenant (Christopher Thompson) living in the father’s studio–and his broken family. Despite the plenitude of characters and complications, the screenplay and the direction keep it all remarkably clear, with the dramatic thrust supplied by the gradual revelations of the secrets that it seems just about all of them have.

It would be easy to label this family dysfunctional, but that begs the point. Rather, La Buche depicts with accuracy the telescoping effect of the holidays and its family gatherings–the lens zooms right in on the weaknesses and conflicts and secrets in this family which are sufficiently familiar to apply, at least in part, to most families. What family does not experience strained relationships, disappointed expectations, love needed and not found, sniping and fault-finding, forgiveness and the unforgiving, guilt, and long term wounds that do not easily heal? It also is made clear that different members of the family see others in the family in radically different ways, often with virtually opposite perceptions of the same relative.

And yet, they come together as a family and they value the family relationships, difficult as those may be. In crises, they are there for one another–to greater or lesser degrees. Thompson observes all of this well and knits it into a lively story. She is well supported by the entire cast; while Gainsbourg (The Cement Garden, Nuremberg) has received much recognition for her work here, Francoise Fabian (My Night at Maude’s, Reunion), as the mother, is notable, as is Claude Rich (Stavisky, Colonel Chabert) as her ex.

It’s the sort of material that could easily have tipped into the saccharinely sentimental, but Thompson keeps it this side of the line, not allowing for easy solutions to complex life and personality situations, leavening the proceedings with warm humor that grows out of the characters and situations. There is, perhaps, an overindulgence in the Russian songs, and "My Yiddeshe Mama" did more to destroy a scene than to help it. Too, this is an extremely self-absorbed group of people; they’ll surely test the edges of patience with some viewers.

The combination of skillful observation, first rate performances, and the right tone of dryness and humor, keep La Buche well above the level of soap, if not aspiring to the level of profound drama. It’s a warm holiday entertainment with heart and smarts.

(18287)
$6.99 (as of January 21, 2021 - More infoProduct prices and availability are accurate as of the date/time indicated and are subject to change. Any price and availability information displayed on [relevant Amazon Site(s), as applicable] at the time of purchase will apply to the purchase of this product.)