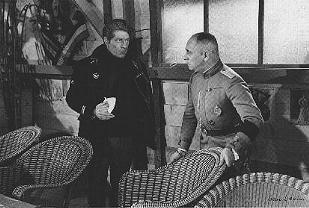 Jean Renoir&#146;s Grand Illusion throws many people for a loop the first time they see it. Its reputation as one of the great works of cinema leads them to expect an eye-popper like Citizen Kane, or a work such as The Bicycle Thief that distills to perfect transparency some aspect of human experience. Instead they find an apparently formless drama performed in a melange of acting styles, a supremely melancholy film that&#146;s crowned by a note of tentative affirmation, a work that is both a plea for ecumenical brotherhood and a surprisingly felt lament for the passing of the aristocracy. The "grand illusion" itself is never spelled out, and even the film&#146;s reputation as an "anti-war classic" is misleading &#150; it doesn&#146;t have a didactic bone in its body.

Set in World War I, the film follows a pair of French soldiers who are taken prisoner by the Germans and transferred through a series of POW camps, and chronicles their interactions with each other, their fellow prisoners, and their German captors. Superficially the movie is something of a shaggy-dog tale: characters disappear and reappear with a minimal amount of explanation, and elaborately planned events &#150; a camp show, an escape &#150; are abandoned or aborted at the last moment. But as the movie goes on its connections keep multiplying, deepening, and eventually the seemingly haphazard events evolve into a somber and tightly-knit meditation on all the manmade barriers &#150; class, nationality, language, religion &#150; that separate people from each other.

The main characters stand at slight angles to each other that highlight their similarities and differences. The two career officers, the captive Boeldieu (Pierre Fresnay) and the German commandant Rauffenstein (Erich von Stroheim), recognize that the war heralds the end of the Old Order that they represent. The mechanic Marechal (Jean Gabin), the Jewish couturier Rosenthal (Marcel Dalio), and the other common soldiers have more earthly concerns, the concerns of regular human beings: home and food and sex. Culture as Boeldieu and Rauffenstein know it isn&#146;t part of their world. When the Czarina sends the POWs a crate full of books, the soldiers, enraged at not finding vodka in the shipment, begin rioting and set the books on fire. The one common soldier who has an education &#150; he spends his time in captivity translating Pindar &#150; is ostracized by his fellow prisoners. Even Rauffenstein, rendered incapable by his heritage of recognizing any bond with such a specimen, gives the man a withering look and murmurs, "Poor Pindar."

Boeldieu can see the historical transition as a joke at his own expense, but Rauffenstein is himself a prisoner to the old forms and divisions. Trapped inside the steel plating that binds up his war wounds, he can&#146;t look on the inheritors of his world with Boeldieu&#146;s equanimity. He pronounces their names &#150; "a Rosenthal, a Marechal" &#150; as one might say "a louse, a vermin," and calls them the "happy gifts of the French Revolution." It is Boeldieu&#146;s embrace of historical inevitability that sets the final chain of events in motion. He can be seen unlimbering himself throughout the film: by degrees he stops pulling rank (and attitude) on Marechal and Rosenthal, and by the end he is defending them to Rauffenstein when he knows what heresy that represents to the German. So when it comes time for Marechal and Rosenthal to escape from the prison fortress, it is Boeldieu who distracts the Germans while his comrades carry out their plan. Boldieu&#146;s seeming madness forces the hand of the uncomprehending Rauffenstein, and what results is tantamount to a double suicide. Rauffenstein knows that he has just murdered the best part of himself, and in one of cinema&#146;s most shattering moments, the crippled German moves to the frail geranium that he&#146;s nurtured in his quarters and liberates it &#150; his last connection to humanity, to himself &#150; from its stem.

Renoir is at his best near Grand Illusion&#146;s end when Marechal and Rosenthal figuratively reenter the world by taking refuge in a farmhouse inhabited by a war widow (Dita Parlo) and her young daughter. The sequence, only some ten minutes long, teems with quiet epiphanies, stirs layer after layer of emotion. A German soldier knocking on the window for directions takes an extra moment to soak in the domestic atmosphere before resuming his march into the night. Marechal and the woman sip at each other&#146;s existences by trying on phrases in their opposing tongues. Rosenthal, catching the two in a "morning after" pose, preempts any chance of awkwardness by advancing with a light civility to shake hands with the lovers &#150; and shakes the woman&#146;s hand first.

Grand Illusion is a cornucopia of great acting. Von Stroheim, a fabled director in his own right, gives a performance worthy of Renoir&#146;s complex conception of Rauffenstein. The fineness with which he entertains the prisoners at his table makes clear the civilized values that Renoir found admirable in the elite, yet his fatal lack of resilience is expressed in the rigidity with which he throws down a shot of cognac. As Boeldieu, Fresnay employs a dry flintiness that has a comic side effect, as when he takes in Gabin&#146;s vulgar yawn with a savory astonishment. Early on his mien is so convincing in its gravity that we&#146;re almost as shocked as Rauffenstein when Boeldieu begins his Pan-like capering among the castle ramparts during the escape attempt. And the scenes in which Boeldieu and Rauffenstein take refuge in each other&#146;s company are indelible. Left to their own, the two men converse in a specially toned language that&#146;s intended only for each other&#146;s ears, betraying their privileged upbringing with unconscious lapses into English; when they plop down on a window-seat for a chat about the good old days, with Boeldieu curling one leg underneath his body, they have the familiarity of sorority sisters.

Gabin and Dalio give the film&#146;s most naturalistic performances, befitting their status as a new earthy aristocracy. Gabin never strays beyond the salt-of-the-earth contours of Marechal&#146;s character, but he&#146;s magnetic just the same. Dalio, as Rosenthal, gives the least conspicuous of Grand Illusion&#146;s great performances. Early on he appears to be a negligible figure, but in the film&#146;s last third he emerges as the film&#146;s most worldly and assured character. The other miraculous performance belongs to Parlo, who conveys the widow&#146;s aching loneliness with a minimum of dialogue. In one moment she catches Gabin staring at her as she&#146;s scrubbing the floor on her knees, and in the simple act of straightening up at the waist she expresses in turn the woman&#146;s initial mortification, a resentful challenge, and finally a frank return of his sexual interest.

More than sixty years after it was made, Grand Illusion remains one of cinema&#146;s great achievements. Sitting at a potent intersection of the dramatic and the poetic, the movie is itself like Rauffenstein&#146;s geranium &#150; delicate, carefully nurtured, and sprouting beauty in the unlikeliest of places.