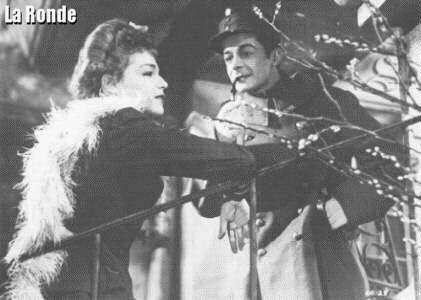 The Road into the Open (1992), Arthur Schnitzler

First important lesson, students. Do not confuse our director here, Max Oph�ls, with his son, the director Marcel Oph�ls, whose 1971 film The Sorrow and the Pity is a very serious documentary about the behavior of the French during World War II.

La Ronde is a fifty year old film version of the play, Reigen, by Arthur Schnitzler, a not at all serious treatment of the universal ways of love as observed in Vienna at the turn of the century.

The premise regularly attracts the attention of producers, and, indeed, an updated interpretation by playwright David Hare, entitled The Blue Room and starring Nicole Kidman, has sold out a limited Broadway run this season (1998) – a production that is, by all accounts, a succes de scandale rather than a succes d’estime. In America anyway, sex – or nudity – sells.

Don’t fret, dear readers, that you don’t have your tickets. Put the hundred twenty bucks you would have spent into your IRA, rent this video for peanuts, and curl up at home with your honey for an evening of mildly racy charm. La Ronde was judged to be immoral and was banned from import to the United States for many years. Believe CV, there is nothing here that doesn’t look tame next to today’s television soap operas.

The soaps should only have such intelligence! Now don’t expect profound here; we are talking, rather, light and sophisticated observations of the game of love. We are guided by a narrator, who weaves in and out of the episodes, starting with a prostitute and a soldier, then the soldier with a housemaid, the housemaid with a young man, the young man with a married woman…ten episodes in all bring us full circle back to the original prostitute.

The narrator tells us toward the beginning: "I adore the past; it is so much more restful than the present and so much more reliable than the future." The lines are echoed with a variation later on as the Count tells the Actress: "The future is unknown, the past melancholy; we have only the present." A slight twist, a different set of motivations gently observed.

Each episode is very short, each has its own small points to make, droll or romantic or bittersweet. Pleasure is fleeting; love – even the illusion of love – is elusive. La Ronde is charming and as fluffy as fresh whipped cream on a Viennese pastry.